Heavyweight boxing star Anthony Joshua has taken some time away from his training camp in Sheffield to sit down with JD’s funny man, Specs Gonzalez, on the latest installment of the YouTube series; ‘Attack Art’. With his pre-fight training hitting its peak, AJ swaps his gloves for a pen to show us a whole new talent.

In the first round, AJ and Specs were tasked with drawing each other. With only a visual aid of a photograph on their canvas, this led to some pretty hilarious results!

The second round had a slightly different challenge as both participants had to wear boxing gloves, while drawin’ an animal. We saw some decent pad work from the boys as they met the task head-on; Specs drew a dog he used to own, whereas our very own AJ drew lions grazing, not forgetting a picturesque background.

For the third and final round, the banter took a competitive turn as both our contestants had to draw their arch enemy. 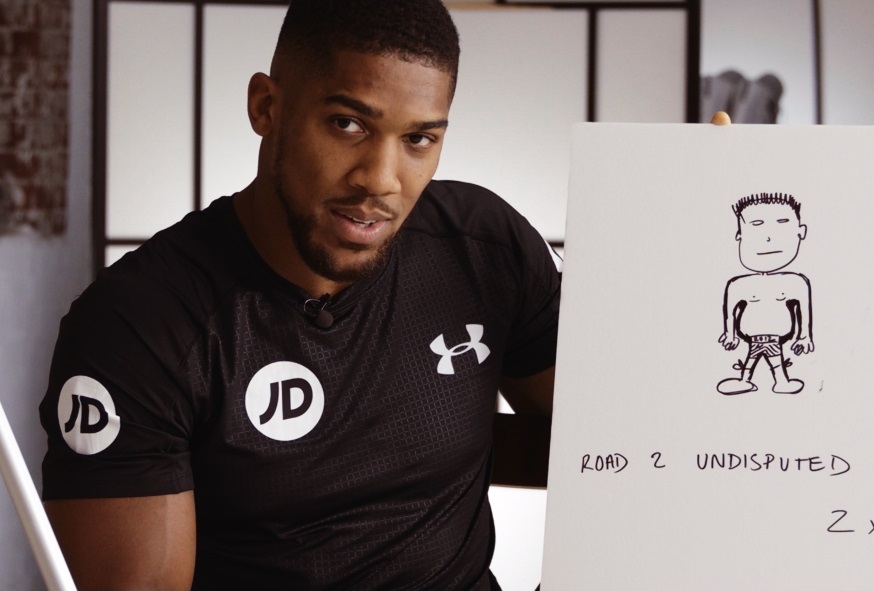 AJ then revealed the illustration of his next opponent, who shocked the boxing world by beating him back in June, before going on to say: “This is a guy called Ruiz, who I’m fighting soon – before this year is out – and my journey to becoming two-time heavyweight champion.

“The only reason why this guy is the arch-nemesis is because there is no other focus.”

Although Joshua’s looking to keep his prep for the fight under wraps as much as possible, recently JD got exclusive access to his training camp. During the behind-the-scenes session, the Watford-born boxer was looking leaner, confirming his own words that he’s fully focused on making sure he becomes two-time world champion.

It’s fair to say that all eyes will be on Ad Diriyah on December 7th, when our man Anthony Joshua will be looking to win his belts back as he takes on Andy Ruiz Jr for the second time…

In the Duffle Bag: Episode 8 with Anne-Marie