The big week has finally arrived! After months of waiting, the highly anticipated heavyweight fight between our guy AJ and Oleksandr Usyk takes place this Saturday at the Tottenham Hotspur Stadium, London.

Joshua was expected to meet fellow Brit, Tyson Fury, to unite the titles in the heavyweight division, but the Gypsy King was ordered to pull out and fight Deontay Wilder in a trilogy bout.

In front of a sell-out crowd that holds over 60,000 people, AJ now faces the undefeated and massively talented Usyk, who has been on a path to heavyweight stardom after conquering the Cruiserweight division. 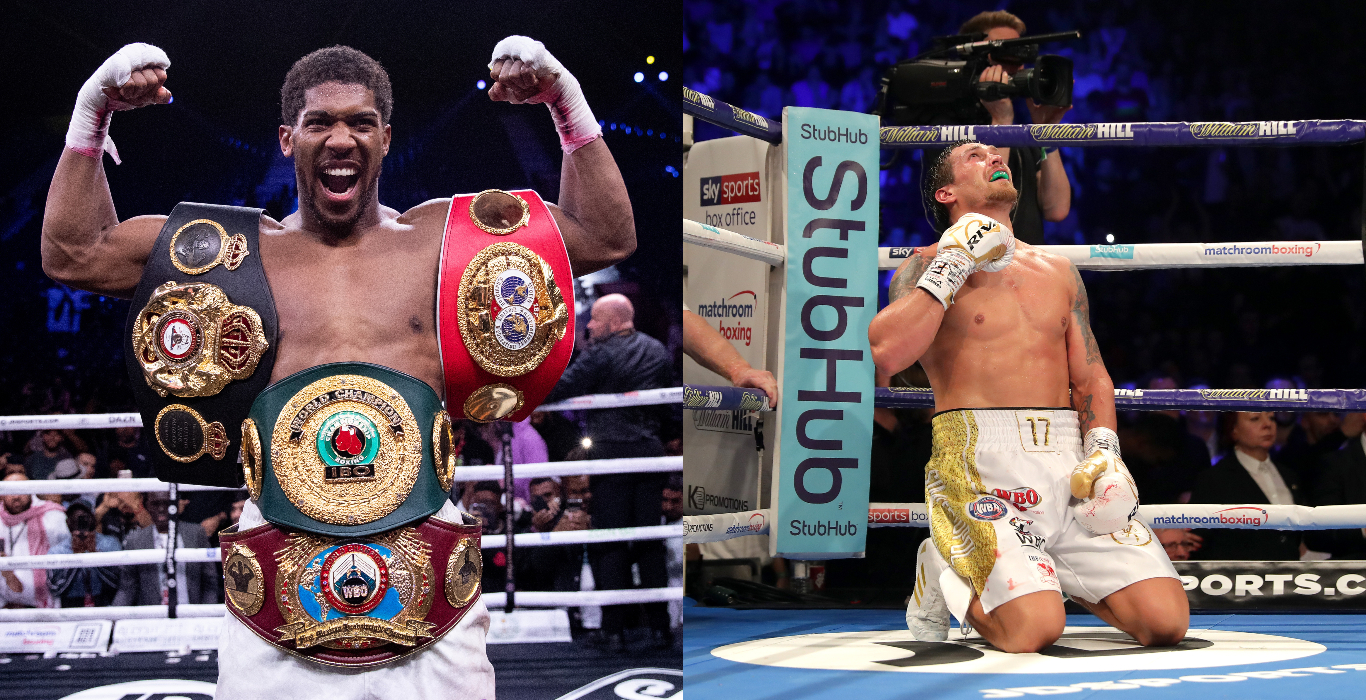 How They Match Up

AJ and Usyk have spent considerable time out of the ring, with neither man fighting this year. Usyk, known as ‘The Cat’, is unbeaten in his 18 bouts, with his previous victory over the durable and game Derek Chisora last October.

In the cruiserweight division – where Usyk won all titles available to him after just 15 fights – his power, timing and footwork combined to wear his opponents down before delivering a destructive final blow.

But against Chisora, eyebrows were raised over his lack of size and punch-power. Now with nearly a year out, he’s had chance to fill out to his true heavyweight figure.

Fighting in a southpaw stance, his technical ability and ring IQ has him listed as one of the best pound-for-pound fighters on the planet. Something that AJ will want to keep an eye out for. 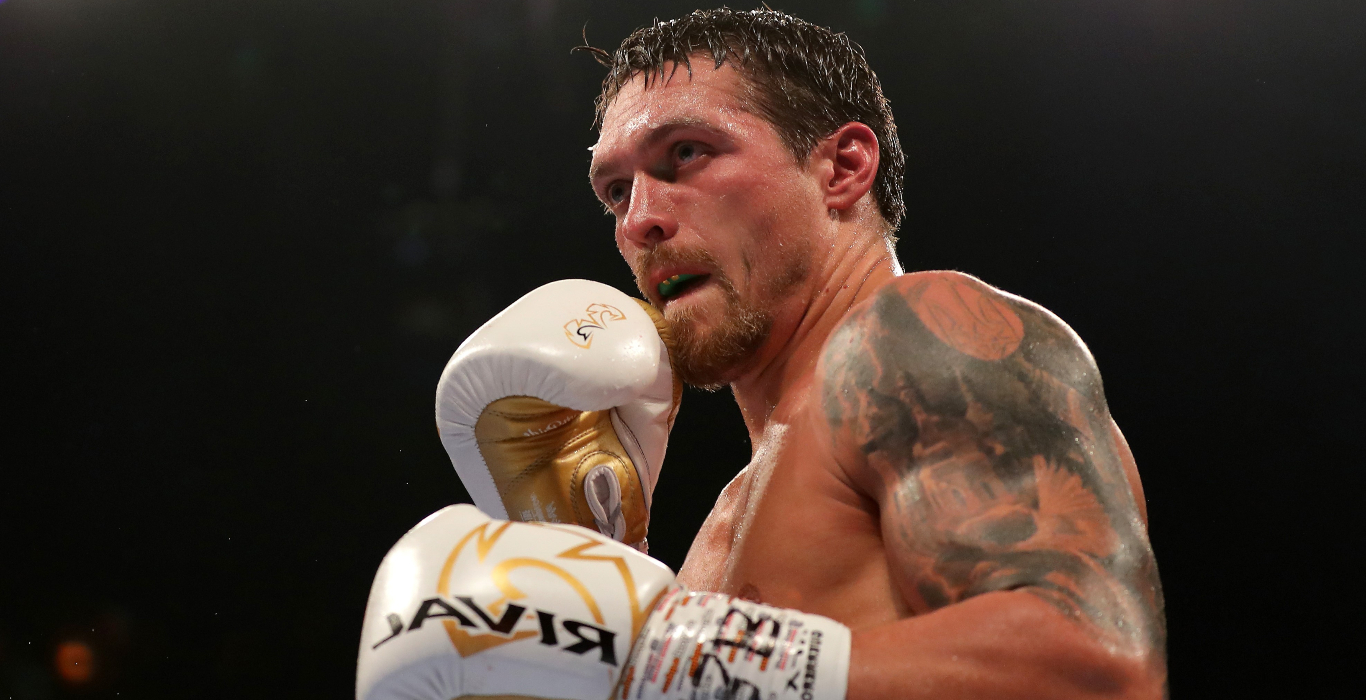 Defending his WBA, WBO, IBF and IBO titles, Joshua wants to continue his road to undisputed champ with another destructive win in front of his home crowd. His last outing against the experienced Kubrat Pulev was a dominant one, getting back to his best with a signature knockout win in the ninth round.

All the attributes point in Joshua’s favour, with a greater height, reach and weight advantage as the more natural heavyweight of the two. He will lean on this experience of previous mega nights that’ve seen him defeat Wladimir Klitschko, Joseph Parker, Alexander Povetkin and Andy Ruiz to rise to the occasion.

Will AJ get the win and set up the long-awaited fight against Tyson Fury? Or will Oleksandr Usyk make a huge statement and take the belts back to Ukraine?

Before the main event ring walks at 10pm, the card is stacked from top to bottom with household names. Lawrence Okolie makes his first defence of his WBO Cruiserweight title against the undefeated Dilan Prasovic. Callum Smith returns after his tough defeat to Canelo Alvarez, while the heavy-hitting Florian Marku is sure to bring fireworks to the bill. 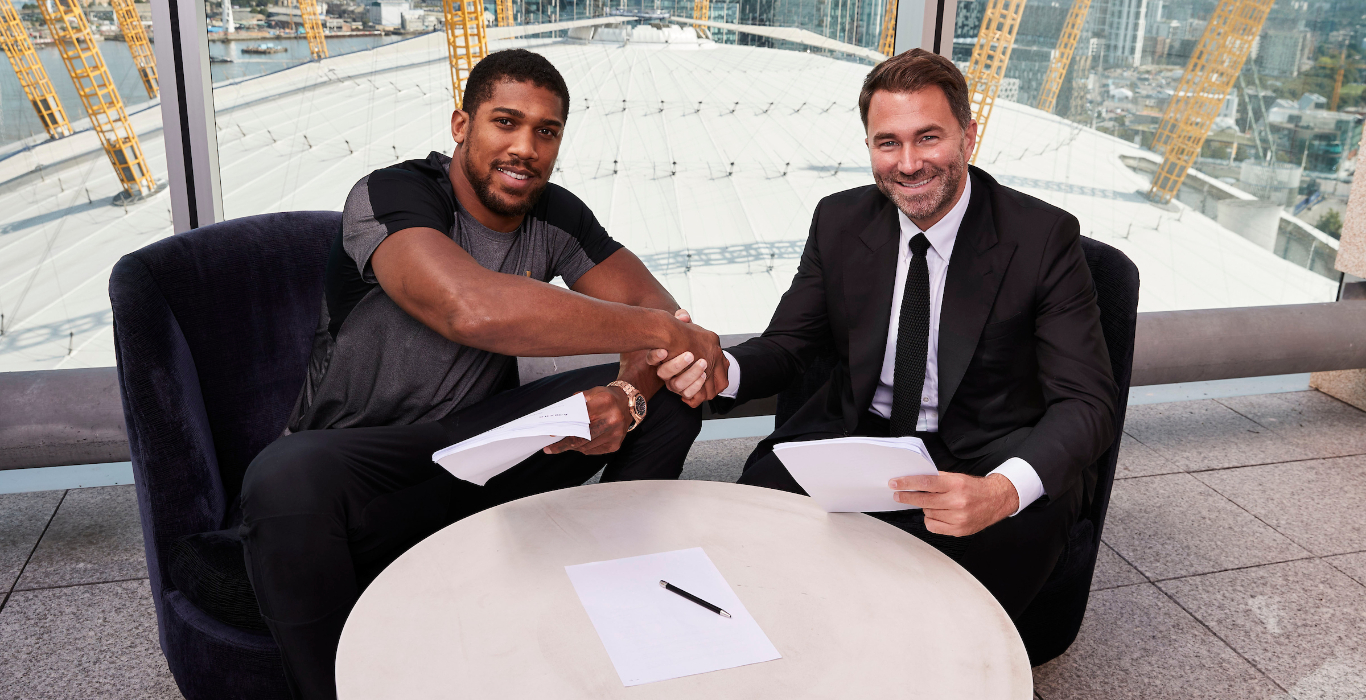 This week, major news came from Matchroom HQ as it was announced that AJ and Matchroom have signed a promotional deal that will last the rest of his career! Joshua and Matchroom boss, Eddie Hearn put pen to paper in front of the cameras to continue their long-standing friendship until the end.

With Usyk touching down in London earlier this week, we caught up with all of Saturday’s fighters as they put on a live workout on Tuesday. Both AJ and Usyk were looking in unbelievable shape as they gave us a glimpse of their skills! 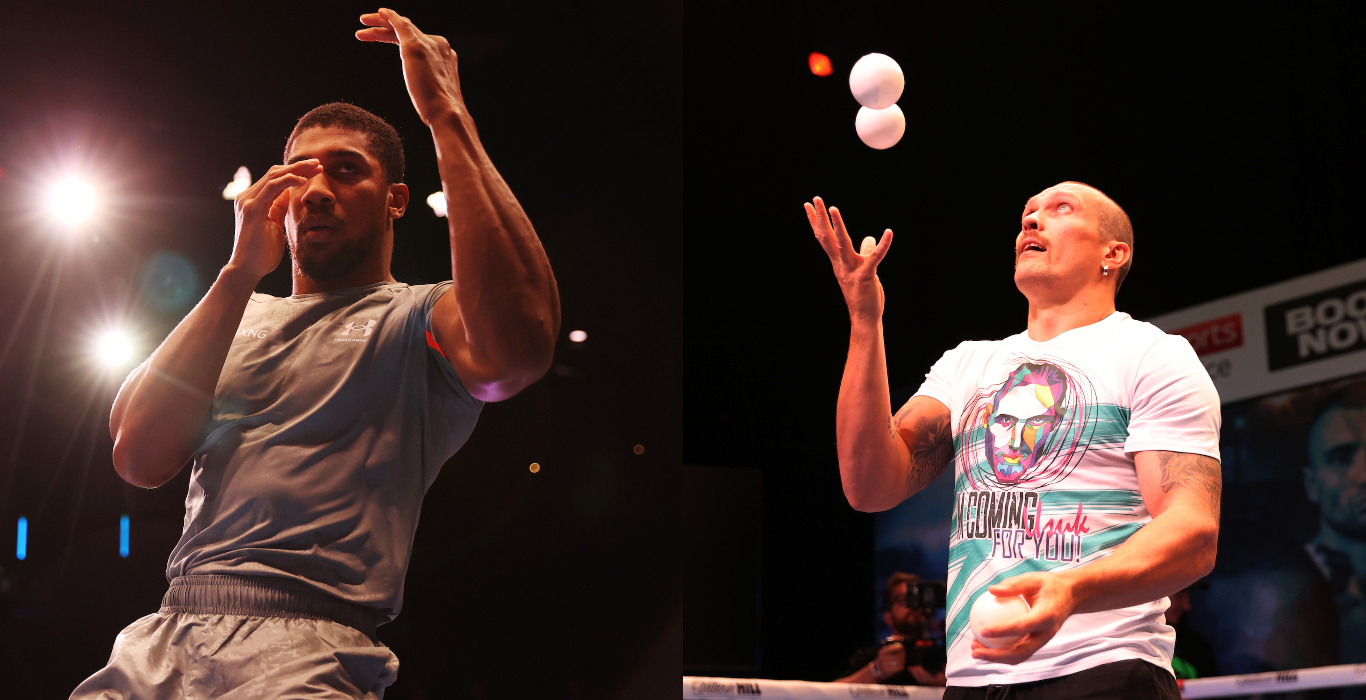 He challenged AJ’s trivia on everything from his career to other sporting icons! How many rounds do you think he conquered? See how he faired here…

In Thursday’s press conference, Usyk surprised us all when he arrived in his Joker-inspired suit, stealing the spotlight from the champion. While Joshua was cool, calm and collected, his opponent was seen to be writing on a piece of paper for most of the presser, later to be revealed it was a sudoku puzzle he was completing – always sharpening his mind!

It wasn’t just Usyk that made the headlines, his fellow countryman and close friend, Vasiliy Lomachenko arrived to show his support. The former pound-for-pound’s father ‘Papachenko’ has been training Usyk ahead of this fight, with his unique training methods being passed on. 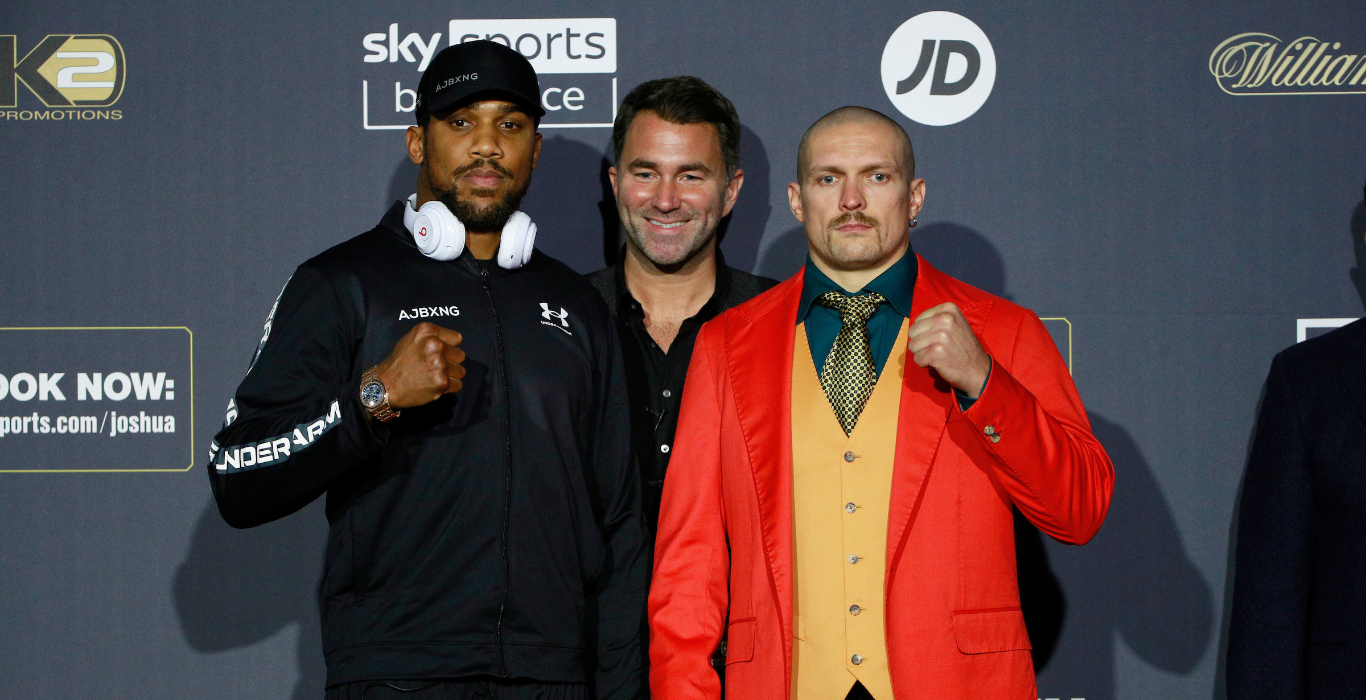 Not only were the headline fighters turning heads, the entertaining Florian Marku was dragged out by security during a fiery confrontation with his opponent, Maxim Prodan, during their face off.

The Mark of a Champ

To mark the mega night this Saturday, Manchester-based street artist Akse P19 took over 328 High Road, Tottenham, with another one of his legendary murals. Following up the iconic Marcus Rashford and Captain Sir Tom Moore depictions, Aske P19 produced an eye-catching 40-foot painting only 10 minutes away from the Tottenham Hotspur Stadium. 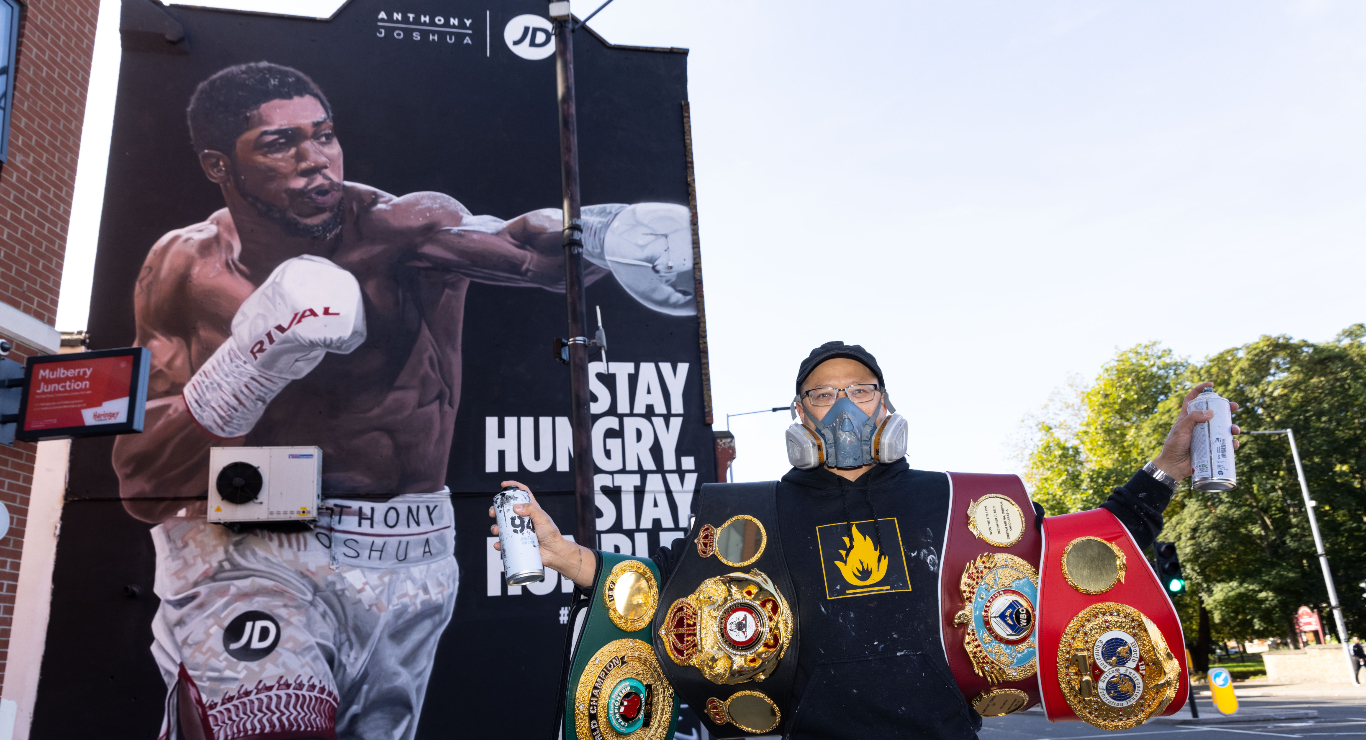 Akse 19 is a street artist that hails from Manchester and has been painting murals since 1992, focusing on photo-realistic portraits over the past 15 years. His signature paintings have become landmarks across the country, gaining worldwide attraction on social media. His street art inspires communities together through the subjects he paints such as George Floyd.

Here’s what AJ made of his creation:

I’ve seen that he’s done things with Captain Tom, George Floyd and Rashford, as well as Leeds United’s Bielsa and Ian Curtis from Joy Division. So to be amongst these great people is an honour and I’m happy that he chose me to be a part of this great history that he’s creating.

I’m not saying that I’m an icon, but the fact that he’s painting people that are doing big things makes me feel humbled and honoured to be amongst those great people and I can’t wait to see the finished project.

The fight in this painting is taken from when I became two-time heavyweight champion of the world, so I feel like it has a great history. I like the hashtag #RoadToUndisputed as I feel that we remain committed to that goal.

Ready for the action?! Catch the night of boxing from 6pm this Saturday, 25.09.21, on Sky Sports Box Office or over on DAZN.

Keeping AJ focused in every camp, check out the latest from Under Armour right here.

Stay locked into @jdsports for all things boxing.

Our Picks: ‘Fits For Freshers’ Week!