Takin’ it back to where it all started, Nike have switched up the Air Force 1 again! This time they’re bringin’ us the NBA pack, which celebrates the teams and the league that made the sneaker so iconic!

First droppin’ in the early ‘80s, the Air Force 1 was designed by Bruce Kilgore – specifically to be a basketball sneaker. Aiming (and succeeding) to change the game, the AF1 brought us the circular outsole that’s become a standard on the court – letting the likes of LeBron James and Carmello Anthony master the spin move! These trainers also brought Air cushioning to the court for the first time, letting players truly Air walk!

The Air Force 1 had an instant connection with the NBA; with six of the league’s biggest players taking part in the first Air Force 1 ad; a photoshoot on an air strip with a jet plane, white jumpsuits and of course, the Air Force 1! Each of the six stars got a pair of custom Air Force 1’s in their team’s colours – the inspiration behind Nike’s latest NBA Pack!

The NBA pack has the iconic silhouette dressed in the colours of the hottest NBA franchises.

Big fan of Steph Curry and the Golden State Warriors? Then grab the blue and yellow Air Force 1 Low to bring some championship winning style to your feet. If you want a classic colourway that shows support for the San Antonio Spurs, then cop the white and black or black and white Lows for 5x champ freshness! Or, throw it back to the team that dominated the ’90s with Jordan, Rodman and Pippen with these red and black Lows that nod to the Chicago Bulls!

Not feelin’ the low cut look? Want a pumped up, OG style? Then check out the white, orange and blue high tops, reppin’ the colours of the New York Knicks! 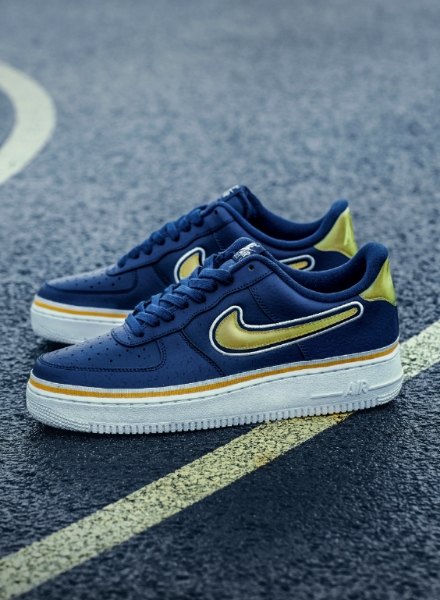 All of the NBA sneakers are finished up with a holographic patch to the heel, with Air Force 1 branding and the iconic Jerry West logo.

Droppin’ just in time for the start of the regular season, you don’t wanna miss the Air Force 1 NBA pack! Check out the full collection in men’s and junior sizing here @ JD.