Usyk vs Bellew: ‘For All the Marbles’

Tony Bellew returns for one last fight, against his greatest opponent to date, and it’s for all the marbles.

The Merseyside ‘Bomber’ takes on the undefeated, undisputed cruiserweight champion Oleksandr Usyk at the Manchester Arena on November 10, for a chance to be crowned as the king of the division.

Fresh from outclassing David Haye with an emphatic fifth round stoppage to upset the odds, Bellew is targeting the fairy-tale ending to his impressive career, which has already seen him crowned the WBC cruiserweight champion.

Ukranian champion Usyk is the first boxer in history to hold all four major world championships (WBC, WBO, IBF and WBA) at cruiserweight and became the quickest to ever win a world title in the division in just his 10th professional fight (beating the previous record of twelve set by Evander Holyfield).

With 15 victories, 11 knockouts, and no defeats next to his name, ‘the Cat’ also boasts a glittering amateur career winning gold at the World and European Championships, as well as gold at the 2012 London Olympics.

“He’s the best, there’s no two ways about it,” Bellew said of Usyk at the press conference.  “He’s a superstar, I told him on Saturday. The only thing he doesn’t have is the looks. He can do everything besides the one big bang. His greatest asset is his feet.

“There’s being an amazing amateur and there’s being amazing in the professional ranks. I have the one thing he doesn’t, a punch that can end it. One slip up. one mistake and it’s over.

“No matter what he says, he’ll be shocked by me. I’m the quickest cruiserweight he’s ever faced.” 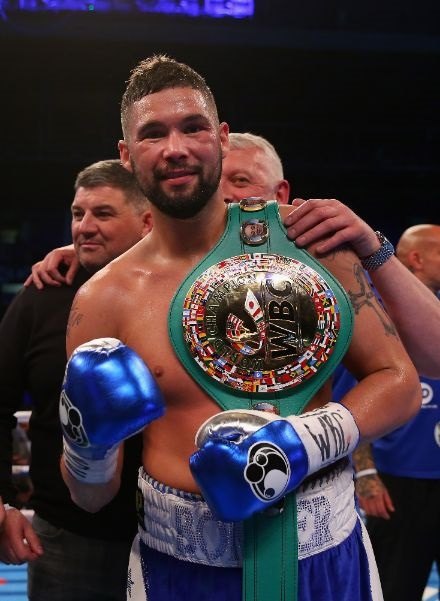 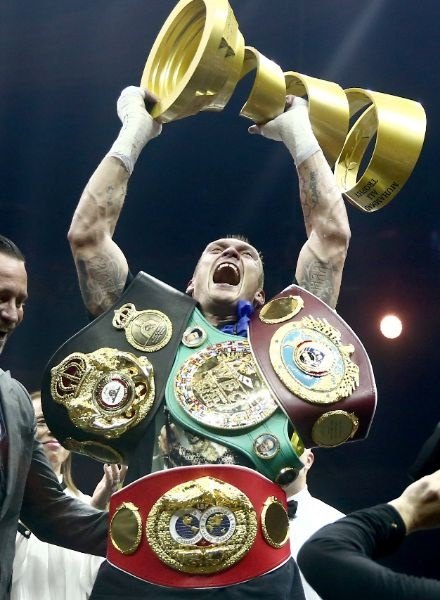 Usyk Using Bellew As A Stepping-Stone To Meet Anthony Joshua?

On signing with Matchroom, Eddie Hearn confirmed that Usyk was targeting a showdown with Britain’s Unified heavyweight champion Anthony Joshua.  “I’m delighted to be working with Oleksandr Usyk and K2 in bringing a pound-for-pound star to the Matchroom team,” said Eddie Hearn.

“Usyk holds all the cards at cruiserweight and is already eyeing a move to heavyweight and in particular a fight with Anthony Joshua. Right now our priority is to try and finalise a super fight with Tony Bellew later this year…”

This narrative has not escaped the attentions of Bellew: “People look at me as if they think I’m a good enough name for them to qualify to fight AJ,” said the proud Evertonian. “I don’t know how they think that, but they do.

“I’m going up against the monster, the man no one wants to fight. Make no mistake, he’s looking past me already. He’s already asking Eddie ‘who am I going to fight at heavyweight?'”

Headlining the undercard, Anthony Crolla continues his comeback in the lightweight division in his hometown against Daud Yordan.  After suffering back-to-back losses to Jorge Linares, Crolla defeated Ricky Burns and Edson Ramirez and has his eyes set on his own dream fight with the man many consider to be the world’s best pound-for pound boxer in Vasyl Lomachenko.

“I’d never be disrespectful and call Lomachenko out, but if I win on November 10th, I’d love to get in the ring with him over here,” said Crolla.

Lomachenko attended the press conference in support of his countryman and training partner Usyk.  Together they have not only put Ukrainian boxing on the map, they have also put the world on notice with their exceptional style, skill and growing achievements.

Once In A Life Time

Usyk stands as a 1/7 favourite heading into the main event against Bellew, but the ‘Bomber’ holds more than a puncher’s chance and will have no problem competing as the underdog.  Under no illusion of the magnitude of the bout, Bellew claims that he wants it more, and even though he doesn’t know exactly how it will happen, he believes he will find a way to win.

Bellew’s trainer Dave Coldwell added his perspective on the opportunity ahead of his fighter:  “It’s something that I look at as once in a life time. I’ve been working with Tony for a long time, to cap it all off in a unified cruiserweight championship fight is as big as it gets. It’s for all the marbles, it’s the pinnacle!”