Professional boxing can be traced back to late 19th century Britain, with the majority of early fights taking place either side of the Atlantic Ocean, and with champions being judged by consensus in the newspapers of the day.

Fast forward to the present day and the sport is competed all over the globe. At the highest level, there’s four belts up for grabs. Win one and you’re a world champion!

Here at JD, we’ve punched the numbers to calculate where boxing is best…

Note on the data:

We pulled through individual champions; for example, even though Manny Pacquiao has won multiple belts in multiple weight classes, he still only counts as one champion for the Philippines.

Countries with Most Boxing World Champions 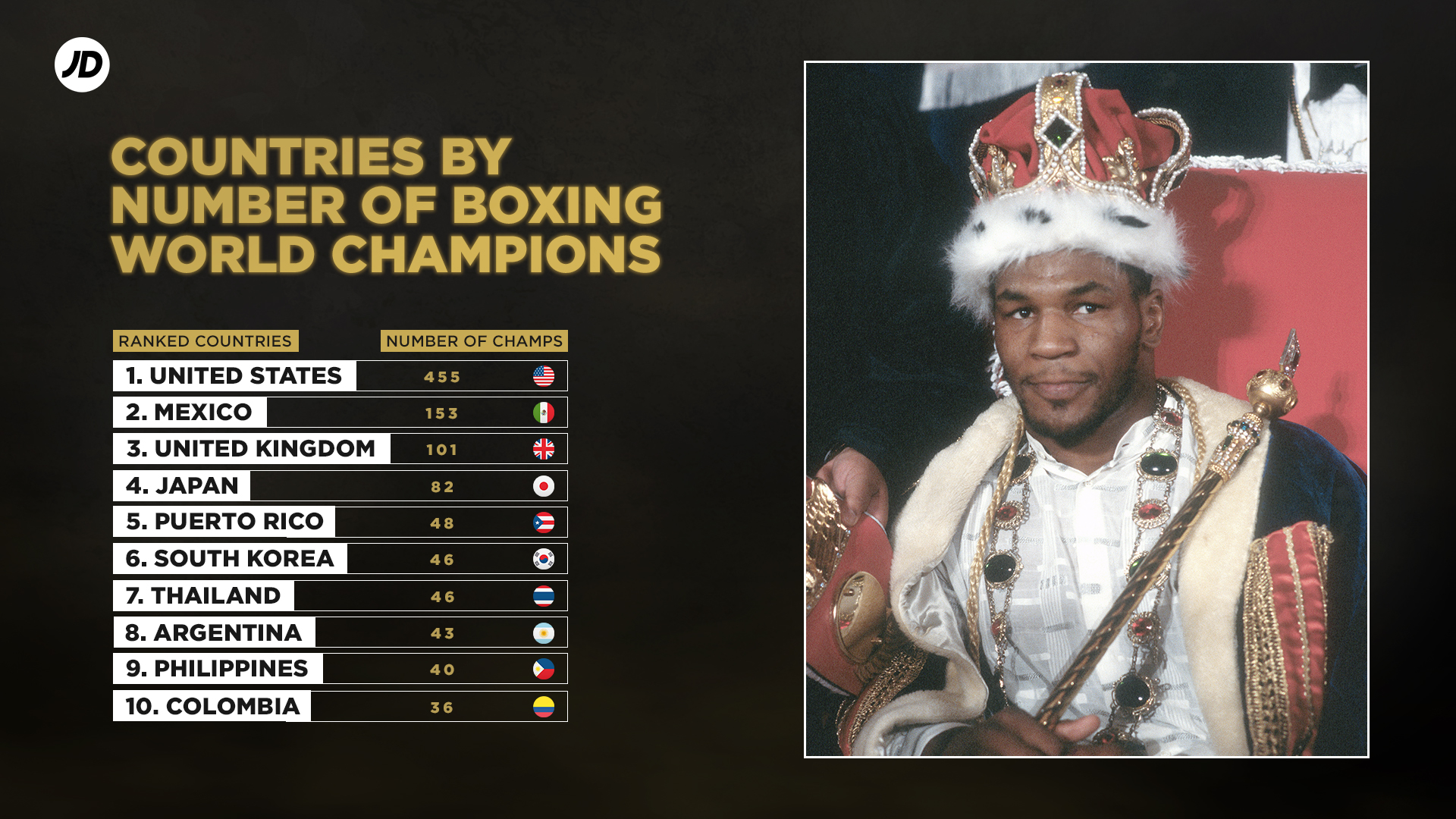 The country top of the pile with the most boxing world champions is the United States. Perched on their crown well above the next pretender, the US boasts a royal 455 champions in the sport, including former greats such as Floyd Mayweather Jr., Mike Tyson and Muhammad Ali, as well as current stars Caleb Plant, Jermell Charlo and Errol Spence Jr.

Mexico is the country second on the list, still a whopping 302 champs behind the States, with 153 world champions. The North American country has a proud boxing heritage and a strong track record of producing world-class fighters. Current middleweight champion, Canelo Álvarez is best placed of Mexico’s current crop to emulate former greats Julio Cesar Chavez and Salvador Sanchez, who won world titles at super-featherweight and featherweight level, respectively.

The only other country with over 100 individual world champions is the United Kingdom, who can lay claim to 101 prizefighters. Brits Anthony Joshua and Tyson Fury currently occupy all four heavyweight belts with a unification bout likely to occur in 2021. Former British world champions include Lennox Lewis, who was the last heavyweight to hold the undisputed title, Chris Eubank Sr., who held WBO middleweight and super-middleweight titles during the 1990s, and Ricky Hatton who won titles at light-welterweight and welterweight level.

Of the top 10 countries in the world to produce the most champion boxers, five come from Asia, the highest-ranked being Japan in fourth place with 82 fighters. A further three come from North America, with the aforementioned top two plus Puerto Rico. Two more from South America, Argentina and Columbia, and one from Europe, the UK, make up the list. 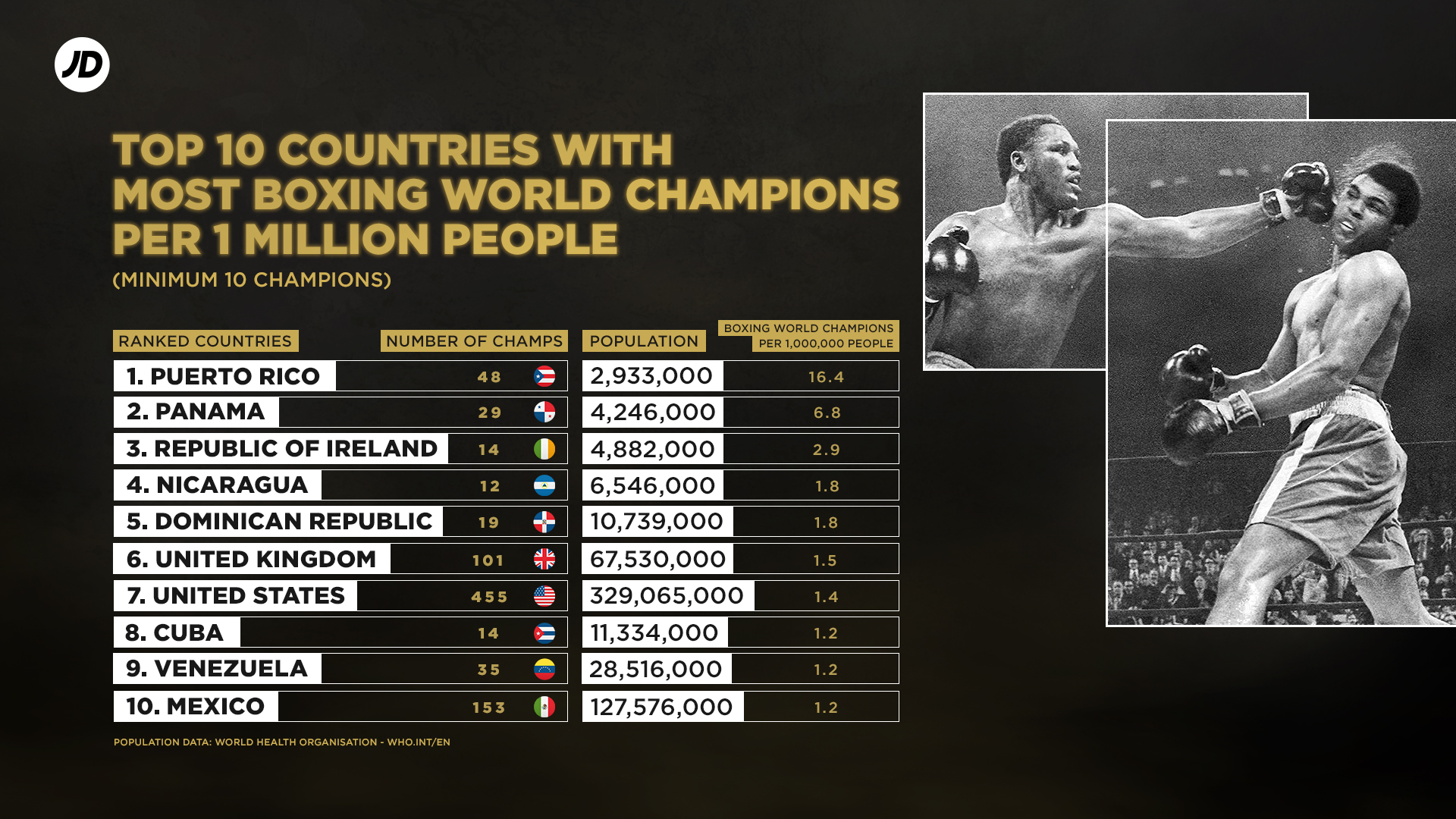 Looking at the top countries with most champions, adjusted per 1 million people, it’s Puerto Rico that has the highest density of belt winners. Statistically speaking, an astonishing 16 in every 1 million people in the North American country are a boxing world champion. Given the fact that today, Puerto Rico’s population is only a little over 3 million, it gives you an idea of the passion for the sport in the country. The country first produced a boxing world champion in the 1930s, when Sixto Escobar won – and successfully defended five times – the bantamweight title. Perhaps the most famous of Puerto Rico’s title winners is Carlos Ortiz, the two-time lightweight and one light-welterweight champion, whose career spanned 17 years from the ‘50s to the ‘70s, winning a very respectable 61 bouts.

Second behind Puerto Rico is fellow North American country Panama, who can boast 7 boxing world champions per 1 million people. Home to a diverse set of fighters, Panama has produced 29 champions. Arguably the most renowned of these is Roberto Durán. The former pro held championship titles in an incredible four weight classes from lightweight up to middleweight during his career, as well as an appearance starring as a sparring partner opposite Sylvester Stallone in Rocky II.

It’s the Republic of Ireland that arrives third on the list, as the European country produces three boxing world champions per one million population. Historically, Ireland has produced some of the most memorable fighters to transcend the sport. Jimmy McCarlnin was one of the first Irish world champions as a two-time welterweight belt winner in the 1930s; The Clones Cyclone, Barry McGuigan, became world featherweight champion in 1985 after beating Eusebio Pedroza; and Steve Collins, who held middleweight and super-middleweight titles in the late ‘90s, never lost as champion.

Of the top 10 countries with the most boxing champions per one million population, the list is dominated by North America. Seven countries come from that continent, in addition to the two mentioned, there’s also Nicaragua, Dominican Republic, US, Cuba and Mexico. Countries with a range of sizes and populations, it only highlights the strength of the sport in North America. This is followed by Europe with two countries with a strong boxing heritage, the UK and Republic of Ireland. Making up the top ten is one country from South America; Venezuela, which, statistically, produces a boxing world champion one out of every one million people. 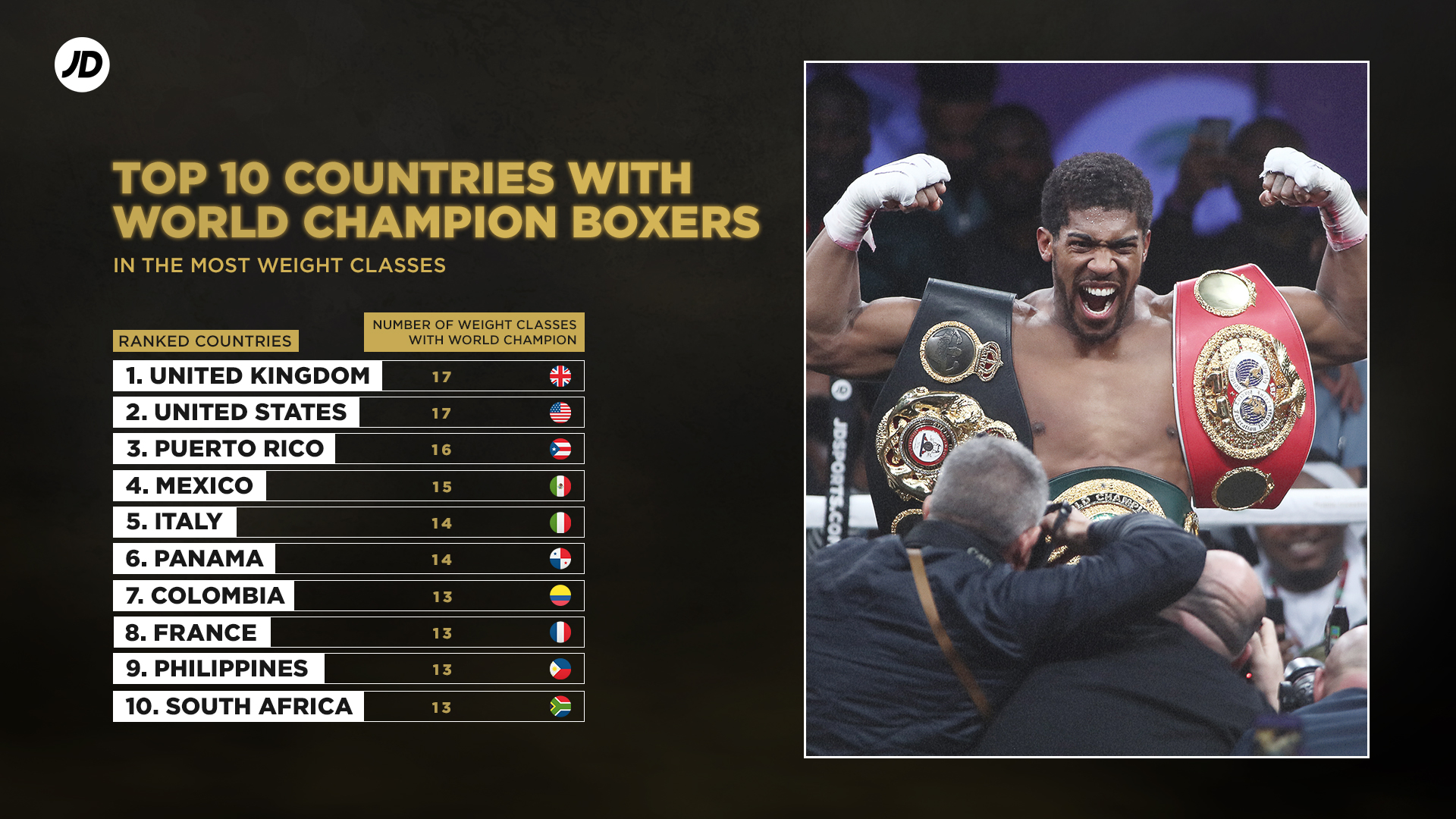 The only two countries on the planet to have a world champion in each weight class are the UK and the US. With long and proud boxing histories, as well as diverse genetic pools, these factors enable these two heavyweight countries to produce prizefighters across all weight divisions.

Puerto Rico falls just short on this list, having world champions in 16 of the 17 weight classes. The only division they are yet to see a world champion is heavyweight.

Of the top 10 countries with world champion boxers in the most weight classes, there’s a fair spread of continents from around the globe. North America once again shows its prowess with four countries situated in the top ten; added to the US and Puerto Rico are Mexico and Panama who have winners in 15 and 14 classes, respectively. There’s three from Europe, with Italy and France – on 14 and 13 divisions each – alongside the UK. Completing the top 10, there’s one-a-piece from Africa, Asia, and South America in the form of South Africa, Philippines and Columbia (all 13).

Look Back: In the Duffle Bag ft. Eddie Hearn