7 Years of Conor McGregor in the UFC

On the 6th April 2013, draped in the Irish flag with both hands raised to the sky, Conor ‘The Notorious’ McGregor walked out to a near empty Ericsson Globe Arena in Stockholm for his first fight in the UFC.

A first round knockout against Marcus Brimage would set the tone for an epic career like nobody had seen before.  The ‘Notorious One’ would fight a further 11 fights across three different weight classes, catapulting himself into a global superstar. Right here, we look at the most defining wins of his career:

After a perfect start to his UFC career, the next step for Conor was a title fight against Featherweight champion and legend Jose Aldo. When injury forced Aldo to withdraw from the fight, in stepped Chad Mendes, hoping to stop the McGregor hype train and derail his title ambitions.

Aside from a Mendes takedown in the first round, McGregor continued his devastating record in the UFC of stopping fights before the third round, finishing Mendes via TKO. The win was McGregor’s sixth straight in the UFC and earned him his first belt, the (interim) Featherweight title.

With Jose Aldo recovered, the time had come for McGregor and Aldo to square off for their highly anticipated championship bout. Having successfully defended his title on 8 consecutive occasions, this was set to be the most difficult fight of McGregor’s career to date.

What happened next only few could have predicted. Just 13 seconds into the first round, McGregor knocked out Aldo with a straight left, securing McGregor the fastest finish in UFC championship history. The new Featherweight king had arrived. 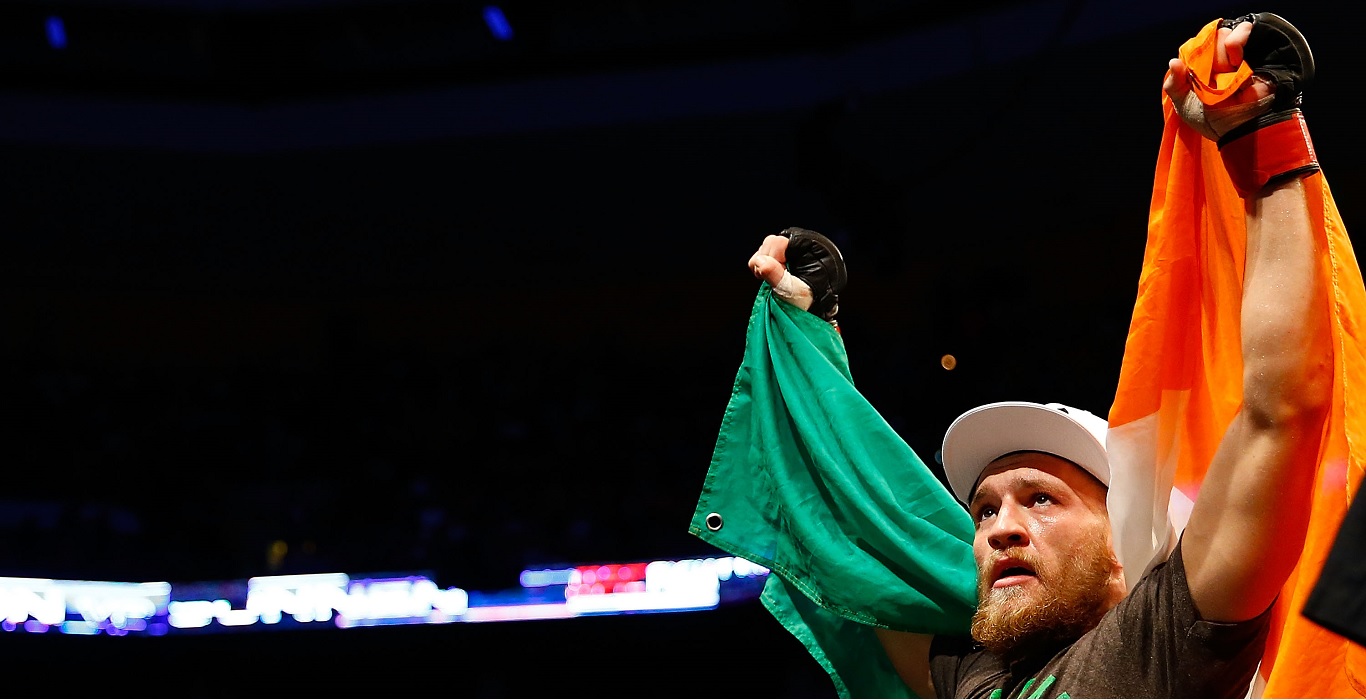 On 20th August 2016, McGregor stepped into the octagon with Nate Diaz for the second time that year. Their first fight held at a higher weight class for Conor, ended with McGregor tapping out to take his first loss in the UFC.

Agreeing to fight the rematch again at Welterweight, after five gruelling rounds, McGregor had his arm raised, proving to the world that he had it in his locker to avenge a loss.

In what President Dana White described as the ‘biggest fight card’ in UFC history, Conor’s Lightweight bout with Champion Eddie Alvarez presented him with an opportunity to hold two belts simultaneously; something that hadn’t been achieved by any fighter in the history of the UFC.

From the first bell, there was only ever going to be one winner. McGregor smoothly cut down the UFC lightweight champion, connecting precise left hands, knocking Alvarez to the canvas six times in less than two rounds before sealing the finish. McGregor had made history; the ‘champ-champ’ was crowned.