Jordan has revived the Air Jordan 14; landing TODAY on the 20-year anniversary of Game 6 in the 1998 NBA Championship Final. The same sneak as worn by Michael Jordan when he made his last yet championship-winning shot for the Chicago Bulls.

The Story Behind The Icon

The story behind the iconic kick is now a massive part of Basketball history. Having returned to b-ball in 1995, MJ and the Bulls went on to win back-to-back NBA championships in ’96 and’97. Looking to nail the second three-peat of his career, only the Utah Jazz stood in Jordan’s way.

With Chicago leading the series 3-2 heading into Game 6, they were only one win away from their third consecutive Championship. The game was closely fought and still tight late in the 4th quarter. With the Bulls trailing 85-86, Chicago won possession with 10 seconds of regular time remaining. Enter Air Jordan!

With series rival Byron Russell taking up his defensive position ahead of Jordan, Michael drove hard to the right before crossing over to his left – dropping Russell to the floor. Pulling up in his Air Jordan 14 kicks, MJ made what would be both the Championship winning shot and his last shot for the Chicago Bulls: a 20-footer with 5.2 seconds left on the clock.

The Air Jordan 14 sneakers have become synonymous with the “last shot” as they represent an exclamation point on a stellar career: Six NBA Championships, Six Finals MVP Awards and Two Olympic Gold Medals! Although, Jordan did come out of retirement for a second time with his 2-season stint with the Washington Wizards in 2001 (just to show he could still ball at the age of 40). 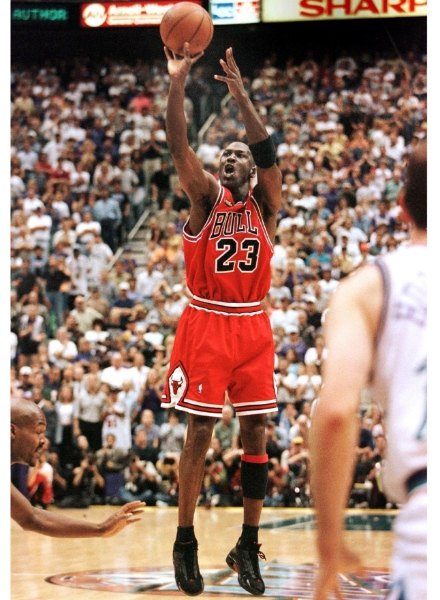 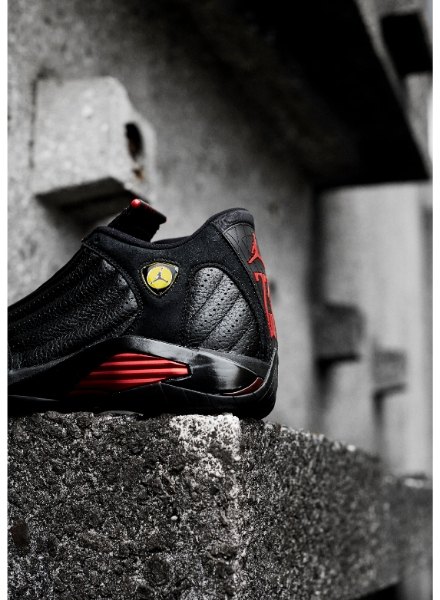 The revived Air Jordan 14 kicks retain the look and feel of the OG sneak. They’re built with a smooth black leather upper with suede overlays, and showcase the distinctive ridge detailing to the sidewalls. Highlighted by the red and yellow accents, the iconic sneaks are finished off with Jumpman branding and MJ’s iconic number 23 to the heel.