Anthony Joshua vs Andy Ruiz: By the Numbers

Granted the opportunity of a lifetime after the Jarrell Miller fiasco, the always-gritty Ruiz looks to seize the moment in the truest sense of the word. Fuelled with the motivation to become the first-ever Mexican heavyweight world champ, ‘The Destroyer’ appears to be unwavering in his belief to pull off the ultimate upset.

Being just days away and super hyped, the team at JD have been digging deep into the data of both fighters to give you a complete breakdown of the upcoming boxing showdown!

So without further ado, let’s get down to business… 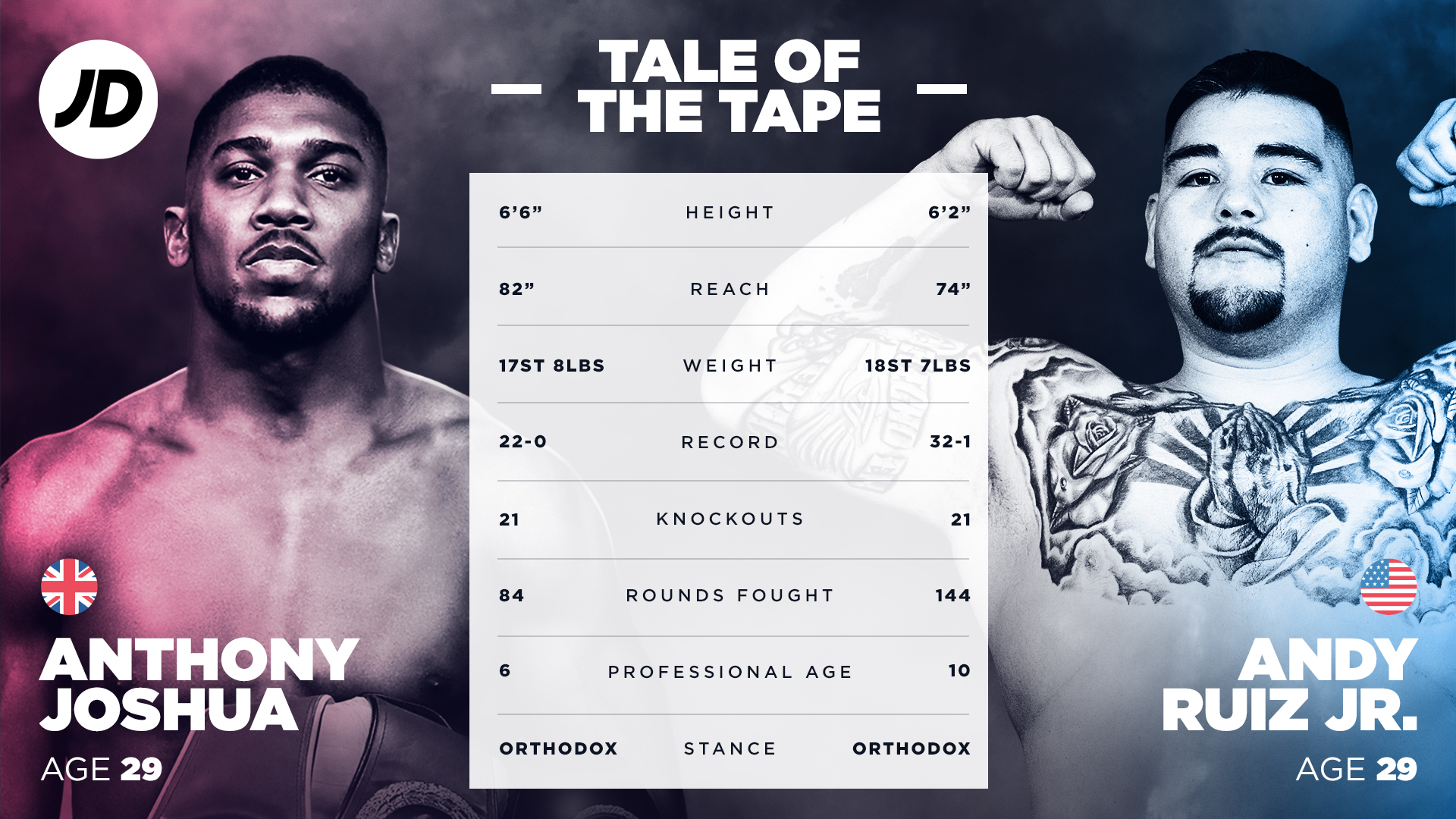 Interestingly, both AJ and Ruiz sport the same number of knockouts (21), although the Mexican American has been on the professional circuit four years longer than Joshua, totalling an extra 12 fights and 60 rounds to his name.

Despite his large frame, Ruiz possesses deceivingly fast hands, which he’s used to outpoint opponents and earn 11 decision wins thus far in his career – although it must be noted that none of these were scheduled for 12 rounds.

Fun Fact – Both men have only ever gone the full 12 rounds once, and they were both to mutual opponent Joseph Parker. AJ managed to best the always-crafty New Zealander over 12 rounds, while Ruiz ultimately lost a razor close decision back in 2016.

With both men exhibiting an impressively high knockout rate from the opening bell, it wouldn’t be at all surprising to see an action-packed start to the fight.

Sporting nine stoppages in the first round, Ruiz’s punching capability is unquestionable – although it does seem to drop off somewhat as the fight progresses. On the other hand, AJ has proven on several occasions that he can carry his devastating power deep into the fight, earning multiple knockouts past the half way mark of the scheduled period.

With his last five opponents currently sporting a whopping accumulative record of 186-19, AJ has defeated a long list of skillful pugilists – most notably heavyweight legend, Wladimir Klitschko back in their historic fight of the year clash in 2017.

While not quite the same calibre as AJ’s resume, Ruiz’s last five opponents still add up to an impressive accumulative record of 148-28-2.

Currently riding a three-fight win streak since the loss to Parker, it’s interesting to note that Kevin Johnson is another common opponent both of our competitors have under their belts. Ruiz recently earned a comfortable decision over the American veteran last July whereas AJ was the first man to finish Johnson with an impressive 2nd round TKO back in 2015.

While at first glance Ruiz may seem like easy opposition for AJ, the data paints a different picture.

It’s undeniable that Joshua’s track record is a class above Ruiz, but The Destroyer’s speed, power and experience in the ring portray a man that’s all but determined to derail the AJ hype train.

Brimming with confidence and carrying the hopes of a nation on his shoulders, Joshua can’t afford to bring anything but his A-game come fight night if he’s to come out on top against the hopeful Mexican-American.

Excited? Us too! Be sure to tune in this Saturday ??