Last week, Love Island continued with both villas reunited after Casa Amor! With more Islanders in paradise than ever, this week has seen some couples make up for lost time, some call it quits and others needin’ a whole load of grafting to make amends…

Missed an ep or just need a refresh on the latest villa goss? Like always, we’ve got you right here. Get the inside scoop on one of the latest Islanders to leave the villa, shop their looks and loads more. Check it out! 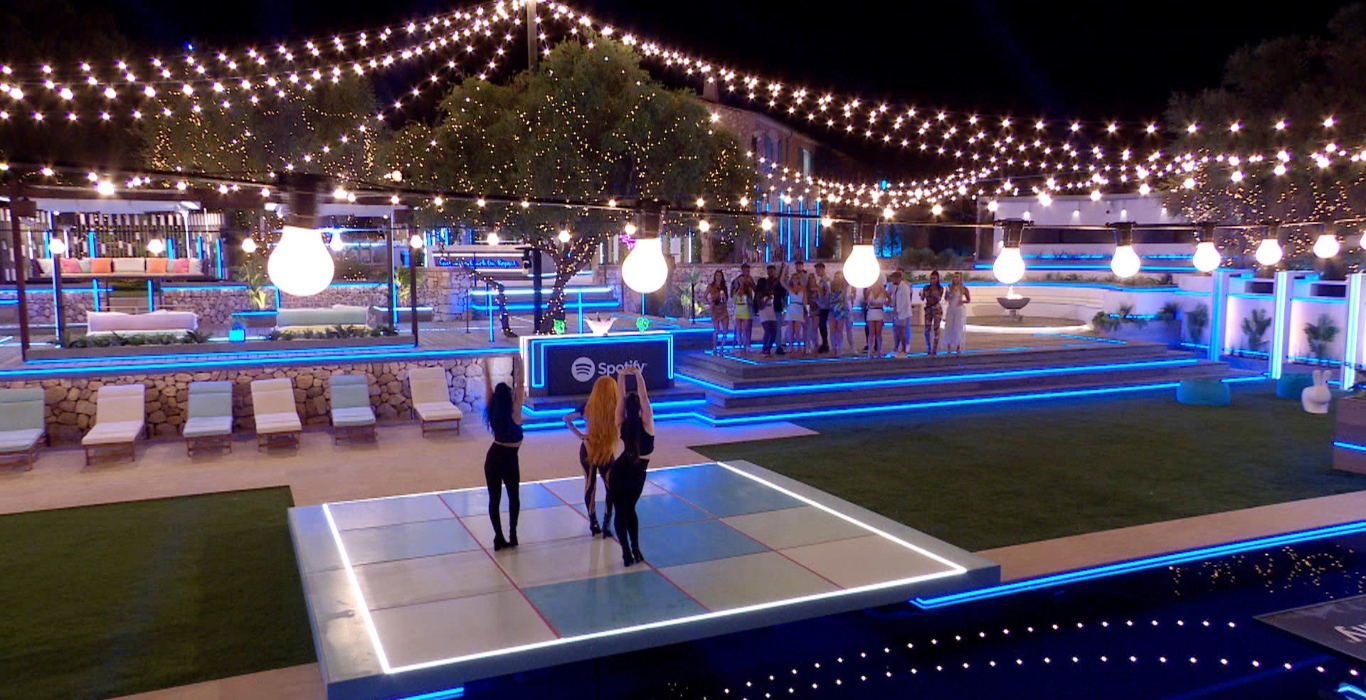 With the boys and girls all back in the main villa, the week kicked off with more than one Islander questioning their recent choices…After a chat to explain *that* postcard, Faye and Teddy were able to rekindle their romance, while Toby found himself missing Chloe. Confused after seeing Kaz again, Tyler wasn’t sure whether his connection was stronger with Clarisse or Kaz, leaving both gals waiting in yet another love triangle!

The Spotify party came at the perfect time to lift everyone’s spirits. Mega-babe Mabel performed some of her hottest tracks, followed up by Liam taking to the stage for a heartfelt speech to Millie – another way to apologise for his actions in Casa Amor. 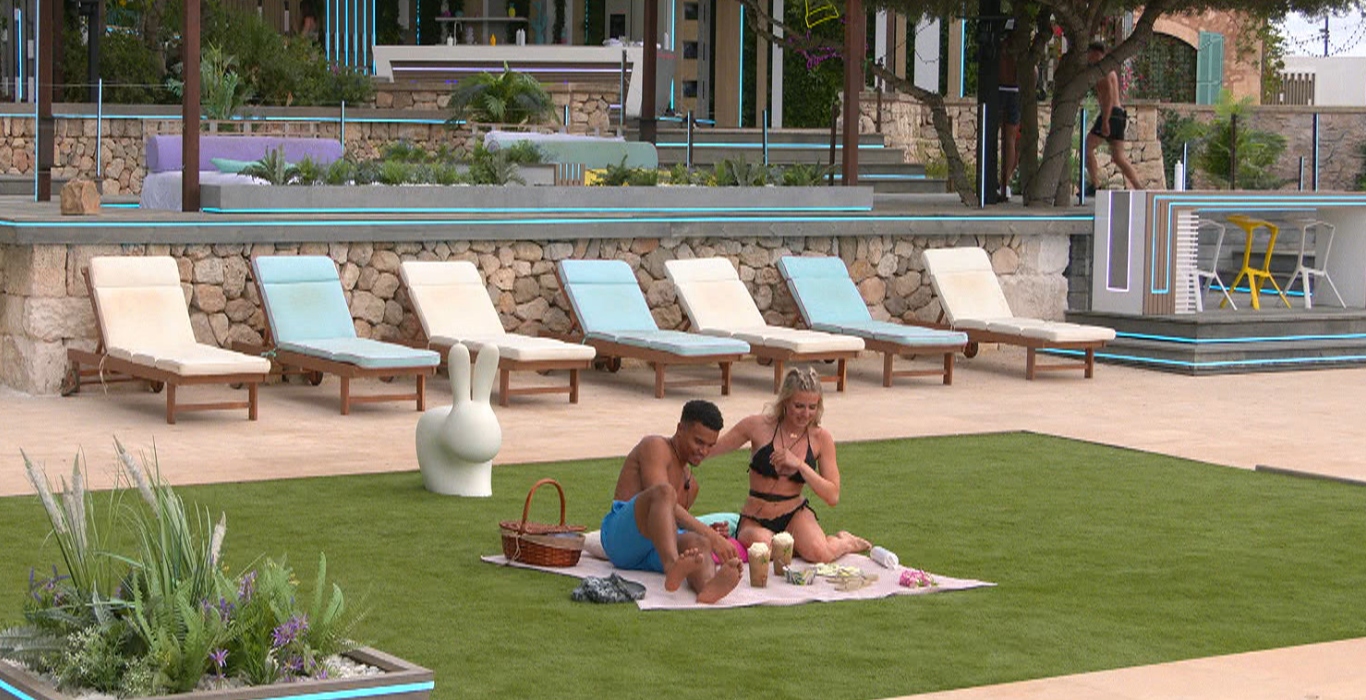 By the middle of the week, it was time for another recoupling. Kaz stayed coupled up with Matthew despite having feelings for Tyler, and Faye and Teddy were once again official. With Abi and Mary last to choose and only two boys left, Abi coupled up with Dale, which ruffled a few feathers with Mary who’d been cracking on with him. But the drama didn’t stop there…that’s when the public got their chance to vote for their fave couples.

The results of the vote left Hugo and Amy, Tyler and Clarisse and Sam and Mary stood in front of the fire pit with their fate in the hands of their fellow Islanders. Only able to save one boy and one girl, they chose Tyler and Mary, who both had connections with people safe and staying in the villa. That meant that not one, but four Islanders were dumped that night! 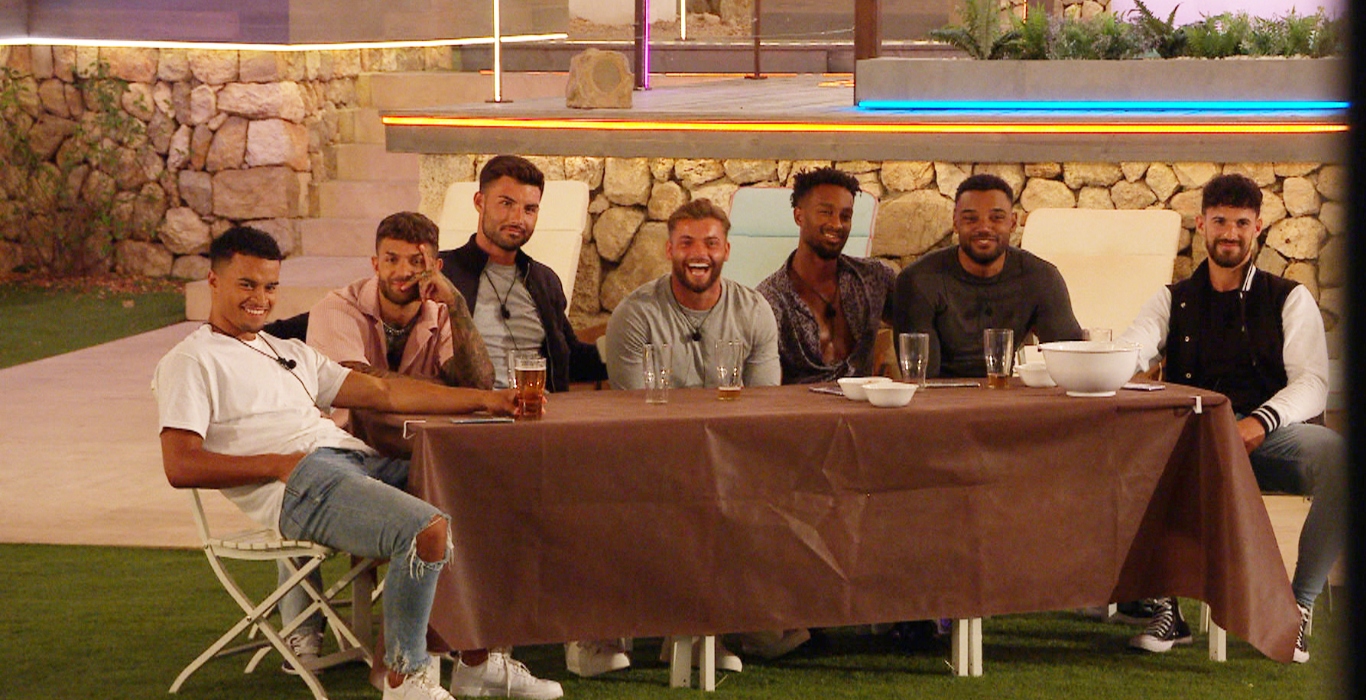 Cue the movie clips! What happens in Casa Amor doesn’t always stay in Casa Amor and the Islanders found out the hard way. In a game of trivia, the girls and guys went head-to-head, with each correct answer winning them a movie clip. But they weren’t just any clips, each clip revealed something juicy about an Islander. From makin’ moves while backs were turned, to questioning feelings to their mates – all was revealed, stirring up the drama BIG TIME.

The week came to an end with Faye ultimately calling off her relationship with Teddy after seeing him admit he was attracted to girls in Casa Amor. Liberty was also hurt, left questioning Jake’s intentions after seeing a clip of him unsure about Lib back in the first week. 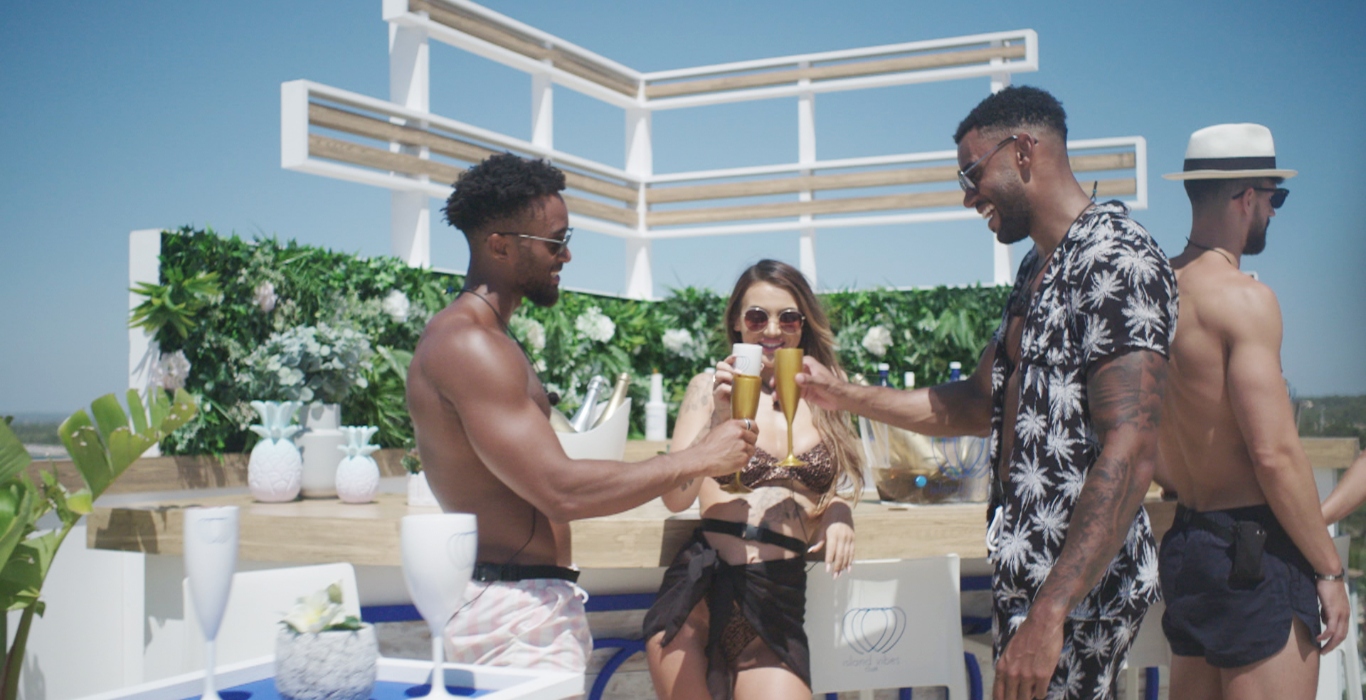 On Sunday’s ep, everyone got to leave the villa to head to the Island Vibes Club. With drinks flowing, the good times soon came to a halt with the arrival of Laura Whitmore. Laura revealed that the public had been voting for both their favourite boy and favourite girl, with Dale, Jake, Tyler and Mary, Kaz and Abi all at risk of being dumped immediately after receiving the fewest votes.

Who will the Islanders choose to save?! 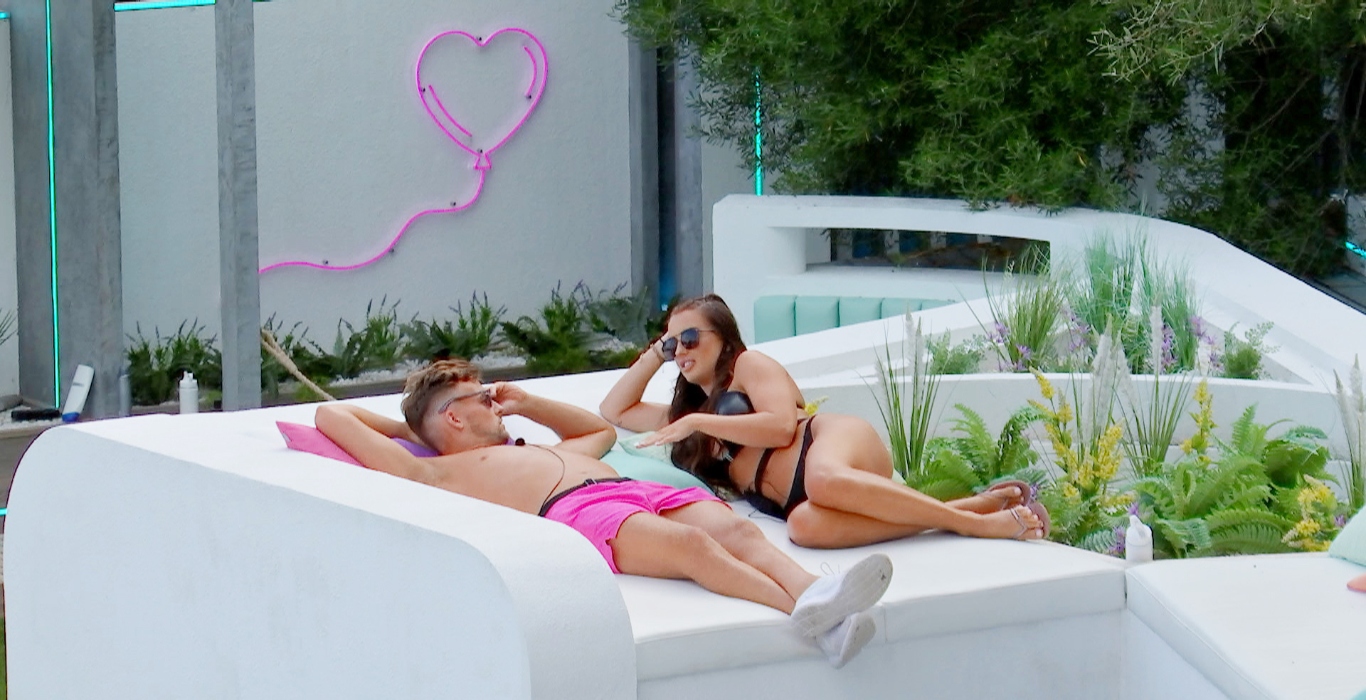 Catch Up with Hugo

After receiving some of the fewest votes by the public, Hugo’s time in paradise came to an end last week and he left the villa alongside Amy, who he brought back from Casa Amor.

He’s had a rollercoaster of a time in there and we’ve been given insider’s access to his exit interview. Want the goss? Keep scrollin’.

How do you feel about leaving the Villa?
I’m obviously gutted because I’ve made some really good friends in there, I’d almost call them family now. At the same time, I definitely feel my time had come. I leave really happy that I’ve had an amazing experience, but at the same time, sad to leave everyone.

How did you feel about being in the bottom couples?
It is what it is. I’ve been on borrowed time for about four weeks in there now. I wasn’t surprised. And I’m really happy that the girls decided to keep Tyler in there because him and Kaz clearly have something special. I really hope they both explore that and enjoy their time together.

What would you want to say to people who claimed you were on a ‘free holiday’ instead of coupling up?
I was trying! I tried really hard. You can’t make girls fall for you if it’s not reciprocated and vice versa. I did try my best, but obviously it didn’t work out.

How do you feel about Chloe re-coupling with Toby?
If Chloe’s happy and Toby’s happy then I’m over the moon. I don’t hold grudges or anything like that. My speech that came out of me at the fire pit, it wasn’t planned as I genuinely thought he was going to pick Abi. I want the best for Tobes. This was our big disagreement – he said a friend wouldn’t do that to another friend, they wouldn’t call them out like that. But for me, we call each other out when we’re in the wrong.

In Casa Amor, what was it about Amy that caught your eye?
The chats we had, the back and forth in Casa Amor with Amy was really good. I really enjoyed just spending time with her, enjoyed laughing, enjoying being present in that moment together and obviously she’s a gorgeous girl. We just got on really well, felt like we’d known each other for ages.

Is a date with Amy outside of the villa on the horizon?
I think with myself and Amy we kind of got back to the main Villa and it was a bit like a holiday romance; you go away and you think it’s amazing and then you come back to the real life and the cracks almost start to show a little bit. I don’t think so [regarding a date]. I think she will reciprocate that. I’m sure we’ll go out in groups and whatnot, but I can’t imagine we’ll be going out for a dinner anytime soon.

Would you recommend Love Island to a friend?
100% do it. You do not understand how amazing this whole production team is and how well they look after you. It’s been tricky on the search for love, but I’ve had people there for me 100% of the way. I feel blessed that little old Hugo from Hampshire has had this chance to spend an amazing summer in the sun.

What’s next?
I’d love to stay involved with kids’ sport, health and fitness, young adults in any way I could. Sport and physical activity is so important for people and it’s often overlooked. I don’t know what that looks like, but maybe online. Joe Wicks has smashed it. It’d be cool to do something like that.

Want the Love Island look? You can cop their fitness ‘fits, trainers and accessories here at JD! From Liam’s Rewired Cap to Tyler’s Vans Old Skool, plus the official JD x Love Island Get Grafting Towel – we’ve got you covered.

Want to work out alongside your fave ex-Islanders?! We’ve got the app for you. Powered by JD, Love Island Fit is an all-new fitness app that lets you work out at home alongside some familiar faces – think Molly, Michael, Joanna and more…

Want to try it? Download the Love Island Fit App now and get a FREE* 7-day trial to see what it’s all about.