LeBron James reaffirmed his position as the best player in basketball, when the NBA’s elite players came together to put on a show in the new-look NBA All-Star game at the Staples Centre in Los Angeles.

In the past few years, the All Star game had morphed into a glorified Harlem Globetrotters show, with the last two years seeing record points scored – a combined 369 points in 2016, followed by 374 points last year – prompting the NBA Commissioner Adam Silver and the players’ union to come together to rejuvenate the showpiece event.

As a result, the 67th edition of the All-Star game saw the two leading vote-getters from each conference – James (2,638,294 fan votes) and Stephen Curry (2,379,494 fan votes) – become captains and draft their teammates, regardless of their conference.

In a bid to rekindle the competitive spirit, both teams would be competing for charities with the winning team donating $350,000 and the losing team donating $150,000: Team LeBron selected After-School All-Stars Los Angeles and Team Stephen selected Brotherhood Crusade.

The City of Stars

An army of all-star entertainers flocked to Hollywood to see the game that would be televised in over 200 countries: Black Panther actors Chadwick Boseman and Michael B Jordan; Beyonce and Blue Ivy; comedians Dave Chappelle, Chris Tucker, Chris Rock and Kevin Hart; NBA pioneers Bill Russell, Kareem Abdul Jabbar, Jerry West and Julius Erving. And in the land of the stars, none shone brighter than LeBron James. 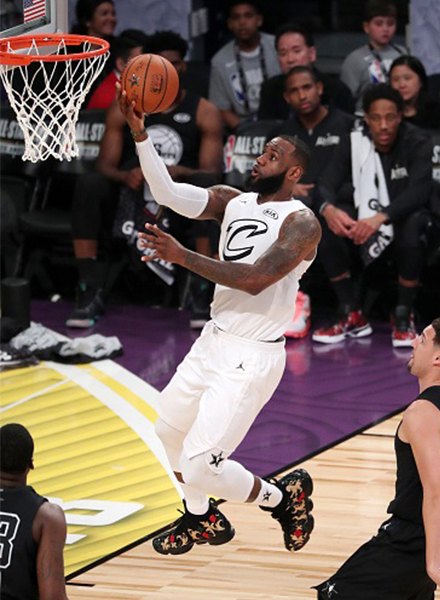 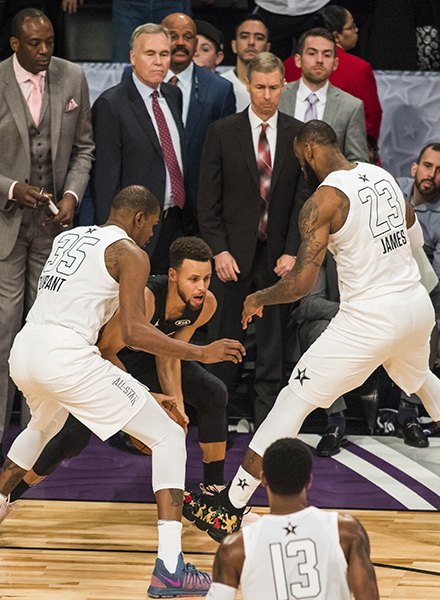 In his record-breaking 14th straight start in an All-Star Game, it was James that set the tone, swiping at Giannis Antetokounmpo for an attempted steal, before bounce-passing the ball over Embiid for an Anthony ‘The Brow’ Davis alley-oop. ‘The Brow’ had donned the All-Star jersey of his injured teammate DeMarcus Cousins in a touching gesture.

Karl Anthony-Towns had propelled Team Stephen into a 42-31 lead with 11 points off the bench. That lead was overturned mid-way through the second quarter as James hit a pair of three-point shots either side of two alley-oop dunks: the first, assisted by Kemba Walker; and the second, a combination with Westbrook that led to a breath-taking reverse dunk to give Team LeBron a 53-52 lead.

Although Curry was having a quiet night, his Golden State Warriors teammate Klay Thompson was heating up, dropping four threes to re-establish Team Curry’s lead to seven points. However, a quick-fire eight points from Paul George, including some full-court defence on Harden, brought Team LeBron to within two-points, as they trailed 76-78 at the half.

Finishing with a joint team high 21 points – alongside DeRozan – Damian Lillard had proven his worth as an All-Star. After being snubbed in the previous two years, the point guard for the Portland Trail Blazers helped Team Curry take a commanding lead, before James inspired his team to an unlikely win.