Ni-k or Ni-key? How Do You Say the Names of Nike, adidas and Other Fashion Brands?

Nike, adidas, PUMA…as some of the biggest brands in the game, we’ve all heard and said the names of them at one point. But, have you ever thought about how you’re saying them?

The team here at JD have put the question to you, to find out exactly how you say our favourite brand names, if your birthplace has any effect on pronunciation, and if men and women say brands differently.

A total of 3081 of you responded to our survey, so let’s dig right in and see what you said!

How Do You Say the Names of the Biggest Sports Fashion Brands? 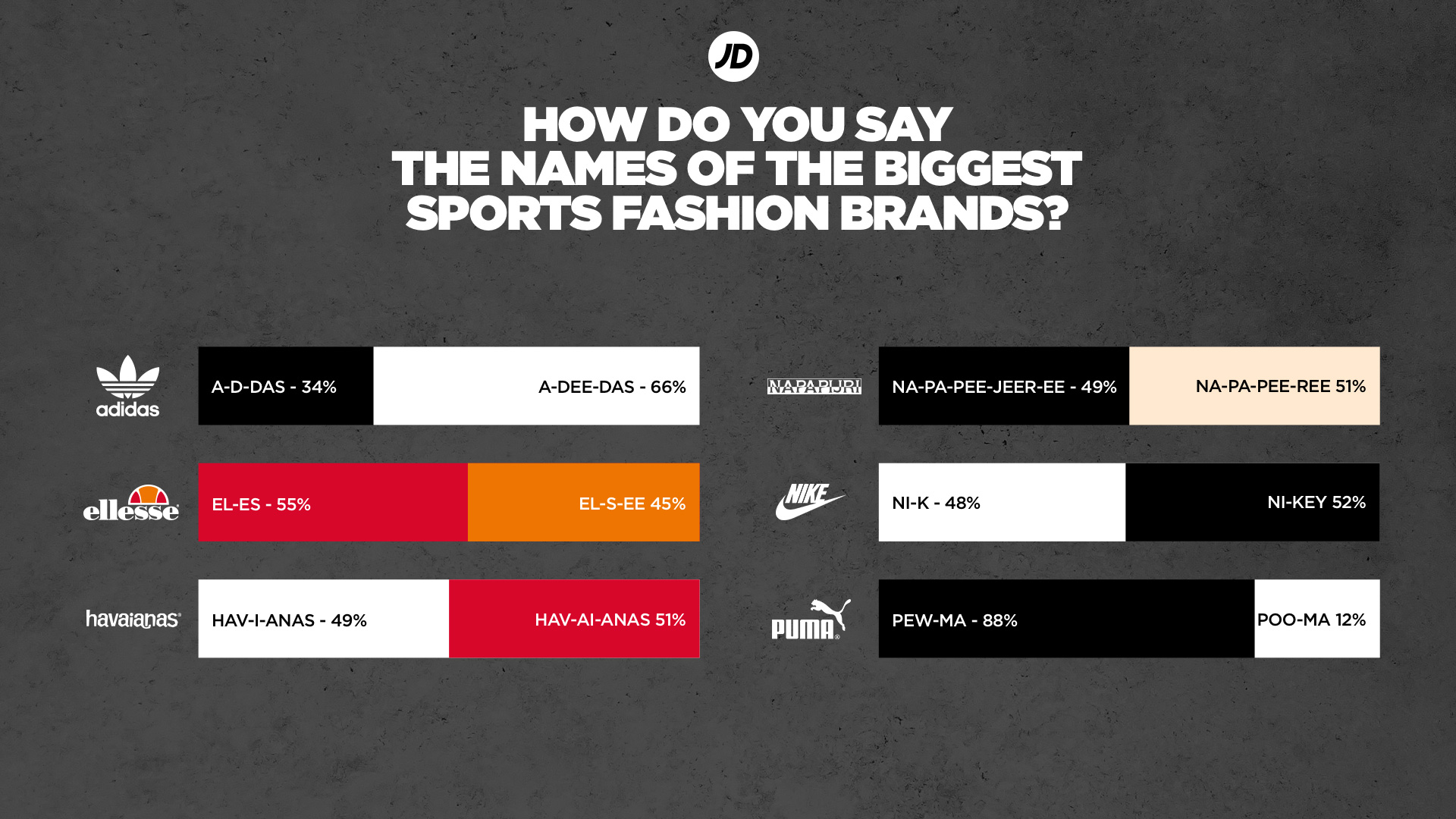 There was less debate around the saying of the German manufacturer, adidas, as two-thirds (66%) revealed you would say ‘a-dee-das’ compared to 34% who would call them ‘a-d-das’.

The most resounding result was for fellow German label PUMA, a whopping 88% of you surveyed said you would call the brand ‘pew-ma’, with the rest admitting they would say ‘poo-ma’.

There was less confidence with Italian brand Napapijri, 51% said they would pronounce the brand ‘Na-pa-pee-ree’, whereas the other 49% said ‘Na-pa-pee-jeer-ee’.

This was identical to Havaianas, 51% of those surveyed would pronounce it ‘Hav-ai-anas’, compared to ‘Hav-i-anas’

How do you pronounce Nike?

We wanted to know if you guys say the names of these brands differently depending on where ya from, so we broke it down on a regional level for the UK.

For Nike, the UK was pretty split on how to say it. Of 12 regions, the more popular articulation was ‘Ni-key’, which was prominent in half of the areas. 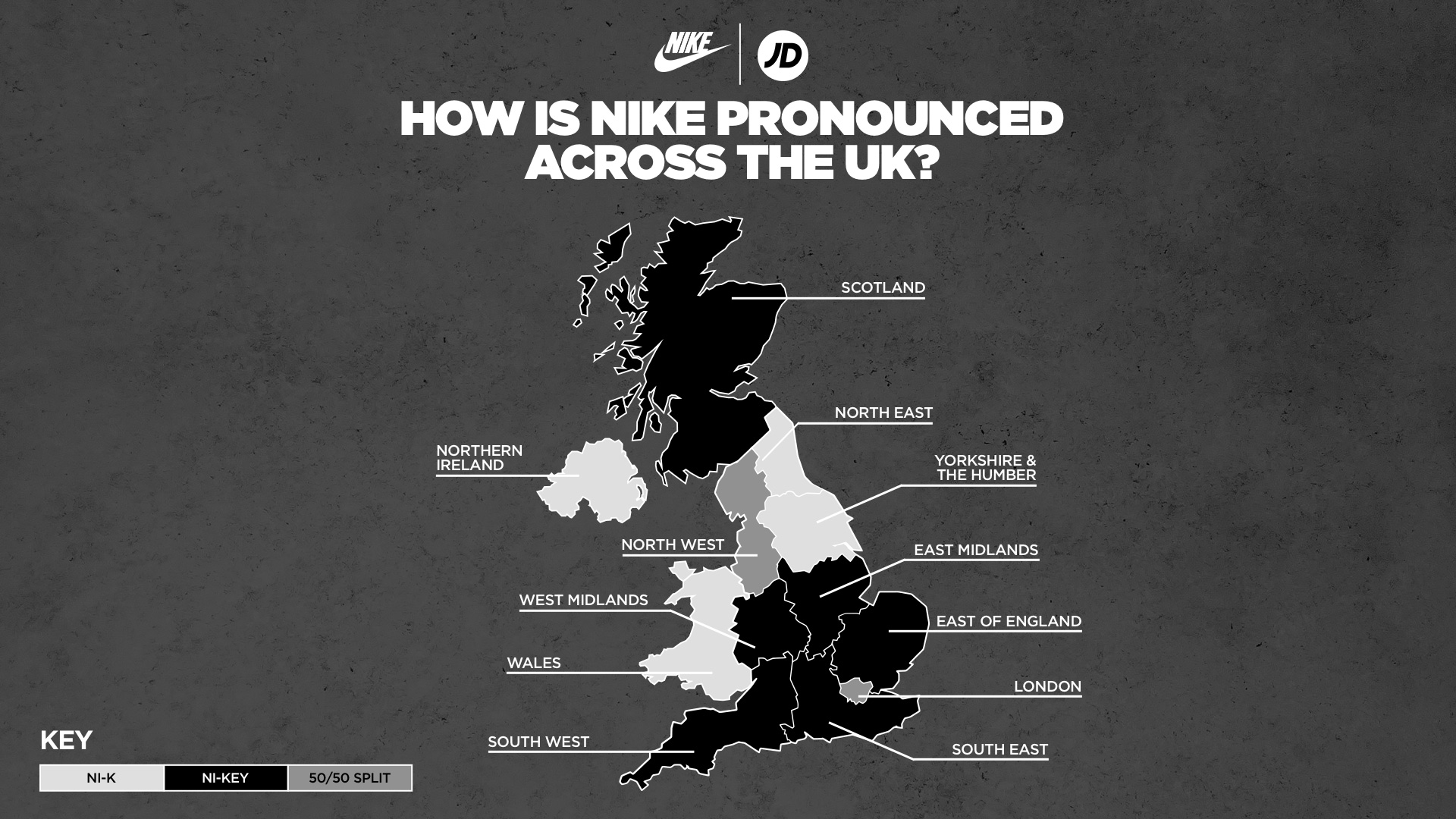 This saying was generally more popular further south with East Midlands, West Midlands, East of England, South East and South West all preferring this way, although those from Scotland did also agree with them.

The shorter-sounding ‘N-ik’ version was more prevalent in areas further north, with the North East, Yorkshire and the Humber, as well as Northern Ireland agreeing on this sound.

The North West and London, however, were split down the middle and couldn’t agree on either pronunciation!

How do you pronounce Napapijri?

Napapijri, established in 1987 and famous for the Norway flag on its logo, was another hotly debated brand name in the UK. 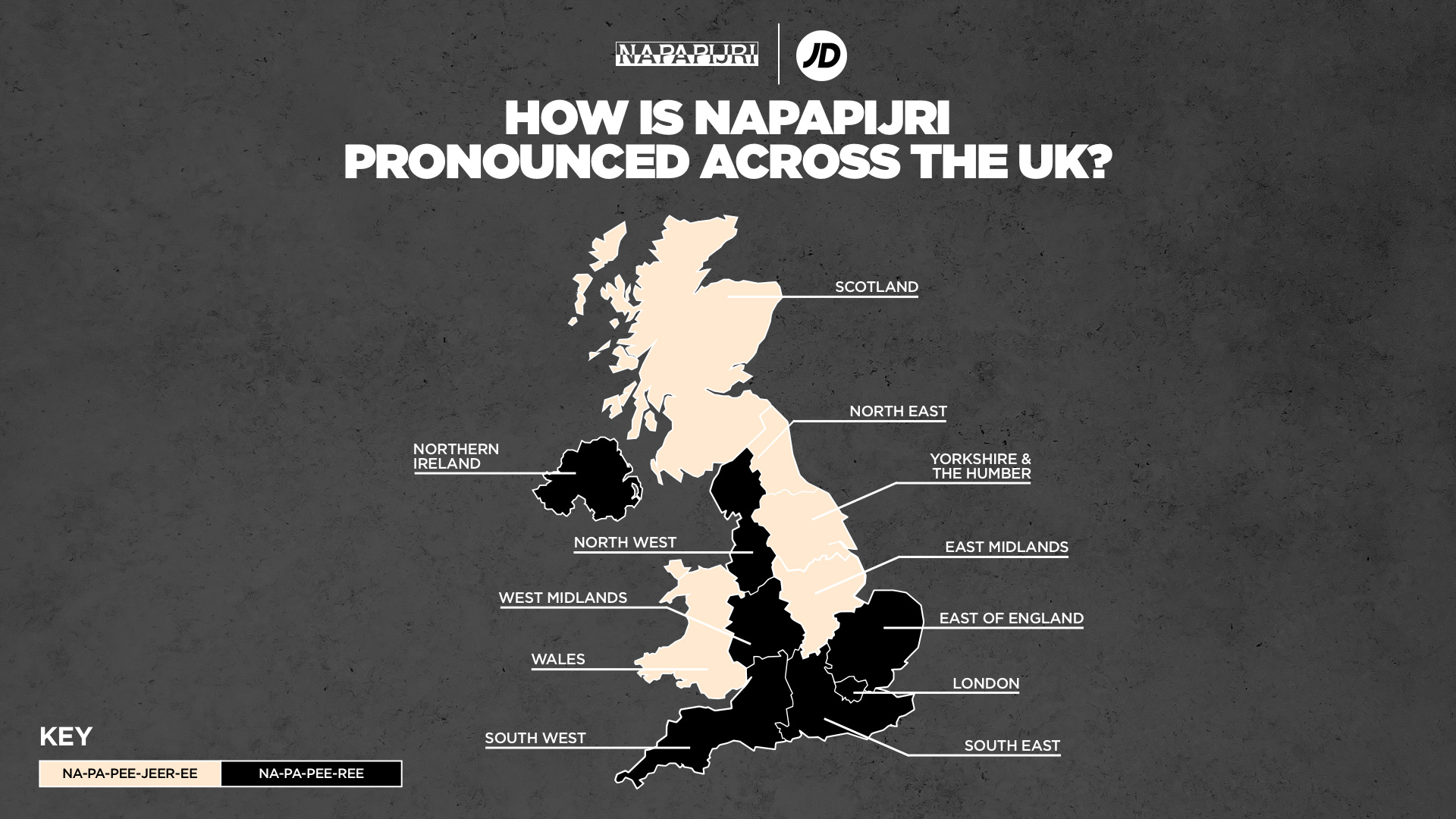 The slightly more popular pronunciation was the phonetic ‘Na-pa-pee-ree’ articulation across the UK, being preferred in seven regions.

These tended to be in more western and southern areas, with the South West, London, West Midlands, South East, North West, Northern Ireland, as well as East of England all opting for this saying.

The ‘say as you see it’ pronunciation, ‘Na-pa-pee-jeer-ee’, in comparison, was generally chosen by those from more northern and eastern regions, with those in Scotland, the North East, Yorkshire and The Humber, East Midlands, as well as Wales agreeing on this version.

Another contentious name was Havaianas. The ‘Hav-i-anas’ version was just about more popular across the UK, with six regions opting for this offering and five more for ‘Hav-ai-anas’, with the North East being split 50-50.

Ellesse’s most popular delivery was ‘El-es’, with 10 regions agreeing to this way of saying the brand name. The only outliers were the South West and Northern Ireland who all had more respondents say ‘el-es-ee’.

The most agreed on brand names regionally were adidas and PUMA. Both of these were unanimously across all areas, with you preferring the ‘a-dee-das’ and ‘Pew-ma’ pronunciations, respectively. 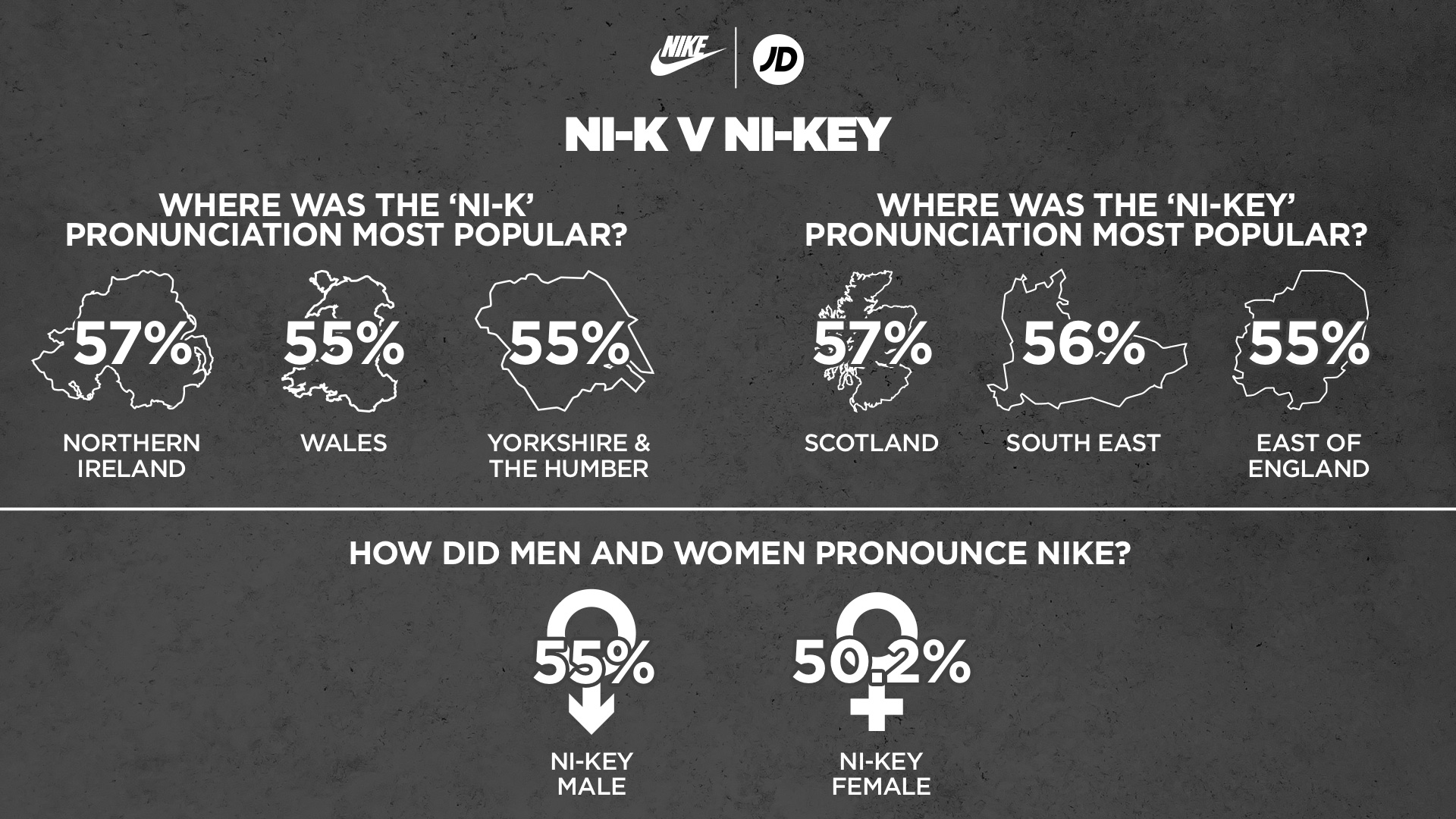 Breaking down the demographics of who actually says Ni-k or Ni-key, we found that ‘Ni-k’ was the most popular in Northern Ireland, with 57% of respondents there opting for that pronunciation; this was followed by Wales and Yorkshire and the Humber (both 55%).

On the other hand, ‘Ni-key’ was the most popular in Scotland, with 57% of respondents there opting for that articulation; this was followed by the South East (56%) and East of England (55%)

When it came to any difference in gender, both men and women actually agreed they would pronounce Nike as Ni-key, but men were more likely to say ‘ni-key’ compared to women (55% v 50.2%)

How is adidas pronounced? 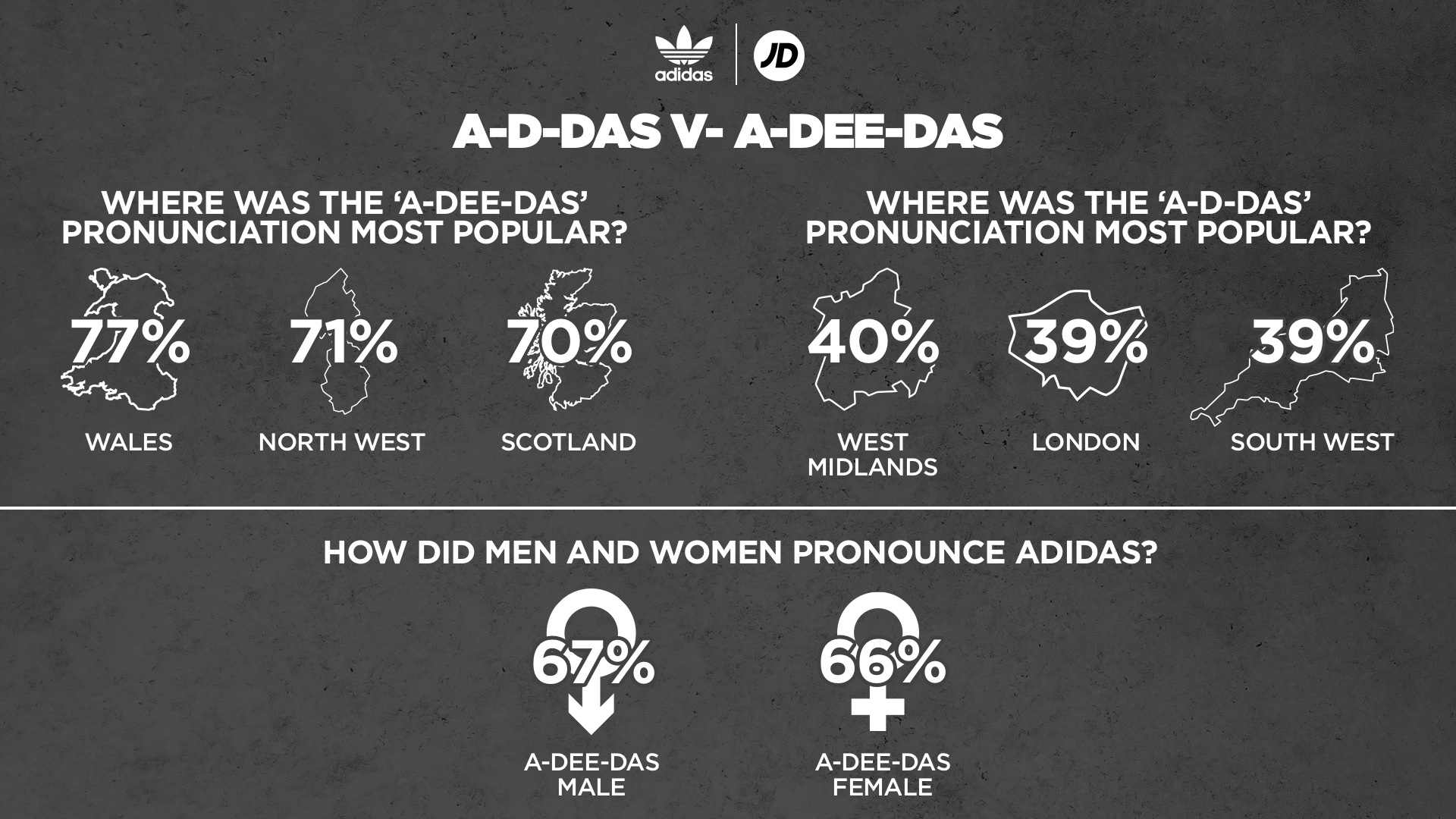 All UK regions agreed on the pronunciation of ‘a-dee-das’; the area where this was most prominent was Wales, where 77% said they would articulate adidas in that way; this was followed by the North West (71%) and Scotland (70%)

The area where this most the contended was the West Midlands, where the largest proportion of any one region would use the pronunciation ‘a-d-das’ (40%)

How would you say the names of our fave brands, do you agree or disagree with the findings?

Either way, you can shop all the biggest sports fashion brands over at JD.

Jama and Dapaah – King of Trims