For the last couple of weeks, @JDOfficial over on Instagram have been tryin’ to find out, once and for all, which gaming franchise is the best!

From GTA to FIFA, Zelda to Mario, we put 16 of gaming’s biggest franchises head-to-head tournament style, with you choosing who you think should move on to the next round!

8 franchises moved on to round 2, 4 to the semi-final and 2 to the final, but only one could be crowned the best gaming franchise!

Here’s how it all went down….

It all starts here! 16 of the biggest names in gaming battling it out to be crowned No.1! 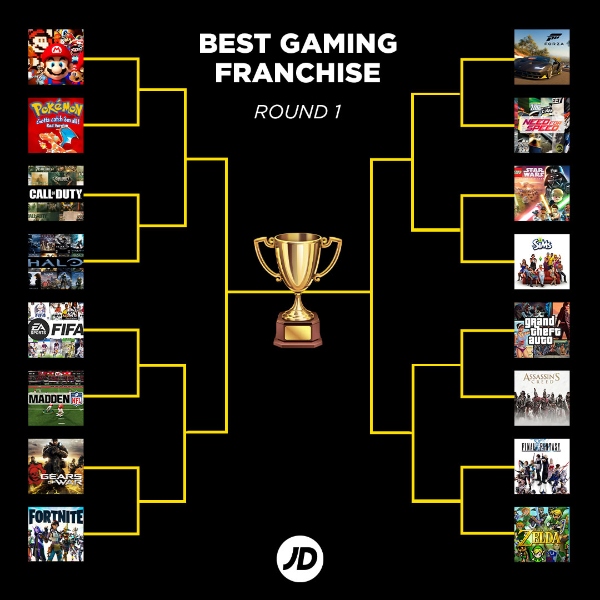 Two OG Nintendo series going toe-to-toe to kick us off! Super Mario from 1985, up against Pokémon from 1996!

One of the most iconic characters in gaming history, Mario started life on the early Nintendo Entertainment System (NES) and is still massive today, with over 20 games in the series to date!

Pokémon was first introduced on the original handheld Game Boy console. The popularity of the games led to a trading card game, an animated cartoon and even movies. It is one of the highest-grossing media franchises of all time!

Call of Duty vs Halo

Next up, two legends of the First-Person Shooter genre. Call of Duty has become the gold-standard to which FPS games now shoot for. Starting out as a WWII game for the PC back in 2003, it was the release of Call of Duty 4: Modern Warfare in 2007 that would be the breakthrough moment, with the game revolutionisin’ FPS multiplayer.

Xbox’s most recognisable franchise, Halo first launched back in 2001 on the original Xbox console, with the game’s main character, Master Chief, becoming the system’s most famous mascot.

The popularity of CoD proved too much here, blowing Halo away with 89% of the vote!

Battle of the sports games. Football vs American Football. The best in the business for simulatin’ ya’ favourite sports, FIFA and Madden reign supreme when it comes to sports games. Accordin’ to you guys though, FIFA is the one true king, claiming 97% of the vote!

Gears of War vs Fortnite

Gears first dropped back in 2006 as an Xbox 360 exclusive and became an instant hit, not only for its great characters and exciting gameplay, but also because you have a chainsaw attached to your gun. Yep, that’s right.

One of the more recent contenders, Fortnite took the world by storm when it first landed back in 2017. But its fresh take on the Battle Royale genre drew in millions and millions of players in its first year.

Controversial to some, but Fortnite takes the W with 67% of the vote!

Forza vs Need for Speed

Who’s getting over the line first in the battle of the racing games? Forza first launched on the original Xbox back in 2005, giving gamers the chance to whip around a range of real and fictional racetracks in over 200 cars!

First landin’ back in 1994, there’s now over 20 main games in the Need for Speed series, including classics like Underground, Underground 2 and Most Wanted. Who didn’t love rollin’ around Olympic City to “Riders on the Storm”?

Forza takes the chequered flag, with 70% of the vote!

LEGO Star Wars vs The Sims

Wholesome fun at its very best, here. What more could you want than the epic Star Wars saga being played out in LEGO? Nothing is the answer!

The Sims will forever be a classic! Building that dream house was always fun (those cheat codes defo helped, though). And who could forget that pets expansion pack! Life. Peaked.

It’s not enough for the win, though! LEGO Star Wars takes it with 68%.

Two of the biggest names in the open-world genre, GTA and Assassins Creed are both heavyweights of the gaming industry.

What other title lets you sneak around iconic historical settings like Renaissance Italy, Victorian London and Ancient Egypt, taking out some of the most famous names in human history? None, that’s what!

Possibly the biggest gaming franchise of all time, GTA never misses. Whether ya’ runnin’ amok in Vice City, Liberty City or Los Santos, you’re guaranteed a good time in these games.

Finally, two legendary gaming franchises battlin’ it out for a place in round 2.

Droppin’ its first game back in 1987, Final Fantasy now has 15 main entries in the series, with a bunch of spin-offs, too! Several Final Fantasy games are considered some of the best ever made.

With iconic titles like Ocarina of Time and Breath of the Wild, the Legend of Zelda series is one gaming’s best. The famous Nintendo series takes the win with 60% of the vote!

Time for the quarterfinals! 8 franchises have made it to round 2, here’s how it stacks up… 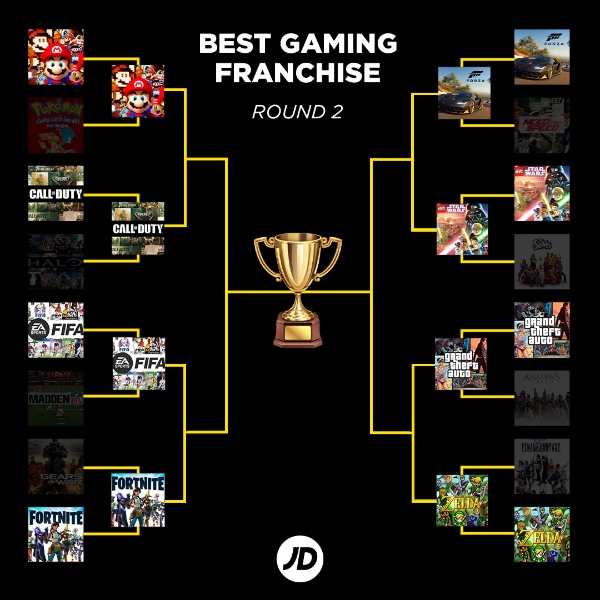 Super Mario vs Call of Duty

What’s your preference? A cheery platformer in which you control a plumber on a quest to save a princess? Or a gritty war simulator that puts you on a quest to save the world? Turns out, it’s the latter! CoD is our first semi-finalist with 64% of the vote!

Not particularly close, this one! Football beats Battle Royale. FIFA takes the win over Fortnite with 77% of the vote. Who doesn’t love a bit of Ultimate Team?

Turns out, loads of you prefer tearin’ about a racetrack in a sports car than having LEGO lightsaber battles. Not sure how to feel about that. Forza takes the W with 71%!

This one wasn’t even close! Which is surprising as some Zelda titles are considered some of the best ever made. But, when it comes to GTA, there just isn’t a bad game in the series. GTA wins with a whopping 94%!

4 franchises remain! Call of Duty, FIFA, Forza and GTA. All massive, but only 2 can make it to the final! 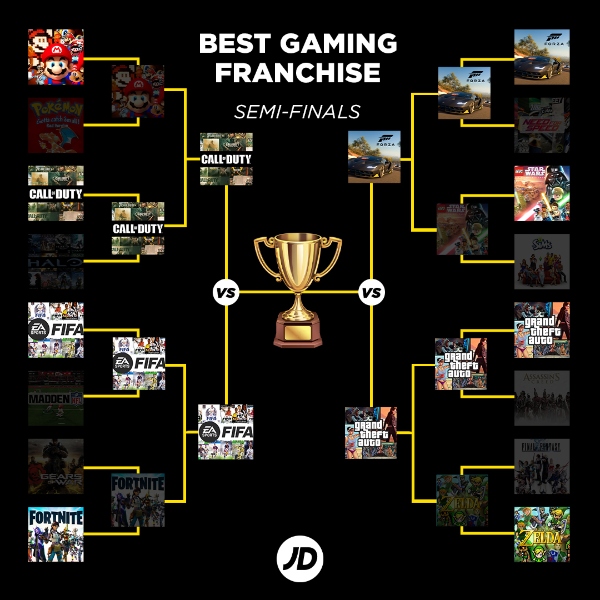 Call of Duty vs FIFA

Now this one was close! Two of the biggest names in gaming. 2 huge franchises, both an essential cop every year. But, Call of Duty sneaks it by just 153 votes! 3,181 to FIFA’s 3,028. It could have gone either way, but CoD is our first finalist! Now, who’s it goin’ up against…

Once again, GTA blows the competition out of the water and is looking the red-hot favourite to take the crown! The legendary Rockstar series heads into the final, with 5,307 votes to Forza’s 985. Not even getting into four figures, it never stood a chance. GTA now faces off against Call of Duty for the crown! We absolutely can not call this one…

Here it is, the grand final! 16 franchises started this tournament, now just 2 remain… 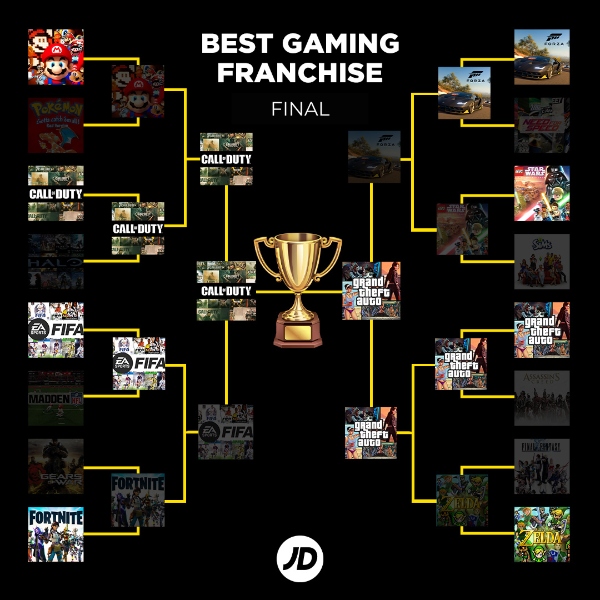 Two worthy finalists! Lots of you thought FIFA should have been included, with the old-school among you shocked that Mario and Zelda weren’t facing off for the title.

It was a close contest, with both teams knocking out some big names on their way to the final. Call of Duty saw off challenges from Halo, Mario and FIFA, with GTA beating out the likes of Assassins Creed, Zelda and Forza.

But there could only be one winner, and you’ve chosen Grand Theft Auto to take the crown! Claiming 57% of the votes, its 4,772 votes to Call of Duty’s 3,584 secured the victory! Hard to disagree, it’s one of the biggest selling media franchises in history for good reason!

So, there we have it. GTA is voted by you as the best gaming franchise right now. Agree with the result? Let us know over on the socials and make sure ya’ keepin’ it locked in for loads more content like this!