Manchester United came back from two goals down at the Etihad to win an exhilarating Manchester derby 2-3, and delay City’s inevitable fifth title.

Paul Pogba played the party pooper with two second-half goals in as many minutes to inspire Jose Mourinho’s men, and Christopher Smalling made amends for his inefficiencies on City’s opener with the winning goal to give United derby day bragging rights.

The build-up to the derby had been dominated by Pep Guardiola’s claim that Mino Raiola had offered Manchester City Paul Pogba just a few months earlier. The Frenchman has endured the toughest period in his young career and has largely been restricted in a two-man midfield, but found himself in his favoured position on the left of a three.

Pep tapped-in to a Spanish-style false nine formation and saw his team control the early stages of the game. Had VAR been in play, Ashley Young may have conceded an early penalty when he handled the ball, following a slip in the penalty box.

But City did not have to wait long to break the deadlock. Vincent Kompany had a derby day déjà vu when he shrugged off Chris Smalling to power home a header from a corner kick, just like he had done six years earlier.

İlkay Gündoğan ignited the home crowd’s celebrations when he doubled the lead with a sublime turn inside the penalty box, before toe-poking his shot past a helpless David de Gea, who had given the ball away initially through poor distribution.

The Citizens had more than enough chances to put the game to bed and secure the title: Raheem Sterling squandered three great opportunities, and Gündoğan headed straight at de Gea when left free from just a few yards out. Yet, they went into the break with a 2-0 lead and the title celebrations were ready to break out. 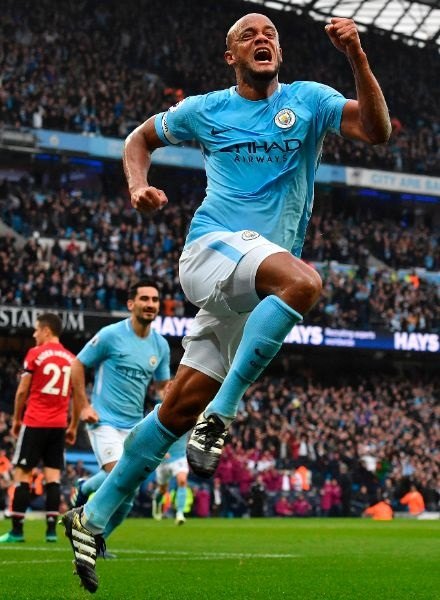 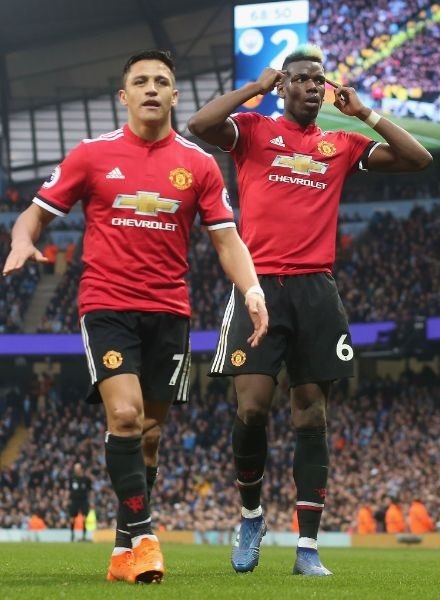 However, within 10 minutes of the restart, Pobga had wiped out City’s lead with a wonderful brace. Alexi Sánchez, who was uncontainable throughout, crossed for Ander Herrera, and his deft chest found Pogba who made no mistake with a cool finish.

Less than two minutes later, the £89m man was rewarded for his marauding run.  Sánchez picked him out in the six-yard box, and Pogba headed expertly in the bottom left corner to give Manchester United parity.

Smalling then made amends for failing to defend Kompany’s opener, escaping the attentions of Nicolás Otamendi, to finish off another superb delivery from Sánchez.

Pep sent on Sergio Agüero and Gabriel Jesus to change City’s fortunes, and the Argentine almost provided a dramatic equaliser with a precise header, but de Gea added another world class save to his portfolio to deny City and delay their title celebrations.