Luke Campbell will attempt to overcome the odds on Saturday, 31st August when he squares off against three-division world champion, Vasyl Lomachenko, at the O2 Arena, London.

In anticipation of this exciting match-up, the team at JD Sports have been crunching the numbers to give you a complete breakdown of both competitors. 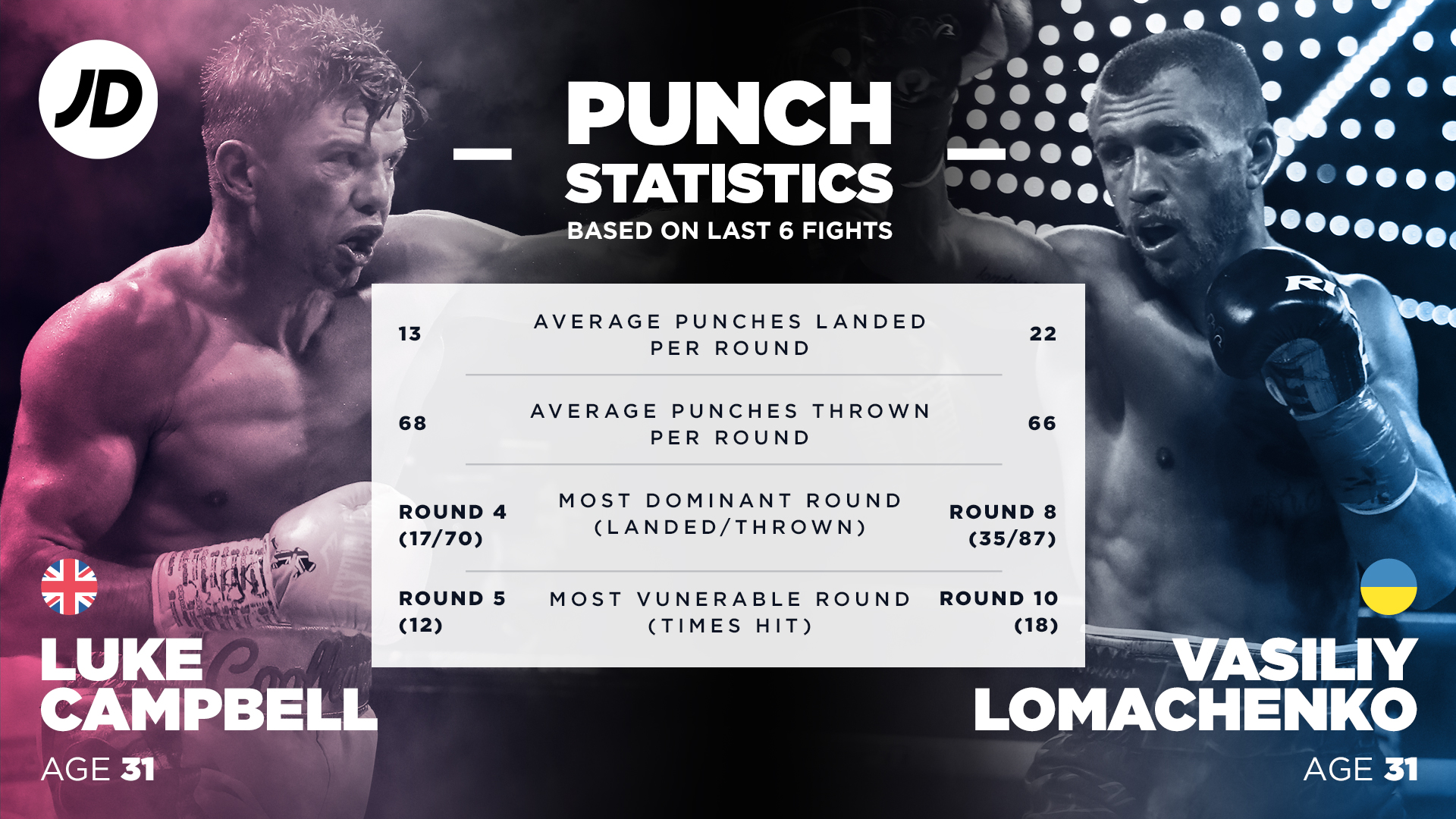 *Based on last six fights with available CompuBox data

Lomachenko’s highest output round is in the eighth, where he lands a whopping 35 punches; subsequently leading to four of his opponents being finished in the following rounds of nine and ten.

Campbell’s highest output round is the fourth, where he lands an average of 17 punches on his opponent. This ties in with his impressive four knockout victories in the subsequent fifth round, implying he really picks up the intensity in this portion of the fight. Interestingly, round five is also the round in which Campbell gets hit the most, suggesting he’s more willing to take shots himself in an attempt to dispatch of his opponents.

Lomachenko’s most vulnerable round is in the tenth, getting hit on average a total of 18 times – five times more than Campbell’s most vulnerable round. Known for setting a high pace that opponents struggle to match, Lomachenko really opens up his offence as the fight progresses, which in turn opens himself up for more return fire.

While this is Loma’s most vulnerable round however, only two of his last six opponents have even managed to make it to the tenth round – extremely impressive considering his calibre of competition.

However, regardless of Loma’s lack of ring time, there is a reason why pundits are already touting him as one of the pound-for-pound greats. Since his debut, every single one of his bouts has been for a championship belt. Campbell on the other hand still has yet to win a world title as a pro.

Since his loss to Orlando Salido in 2014, Lomachenko has looked largely unstoppable and is currently riding a 12 fight win streak – most recently dominating Anthony Crolla back in April.

Fun fact – Jorge Linares is actually a common opponent for both competitors, with Lomachenko spoiling Linares’ 13 fight win streak with a tenth round TKO victory in May, 2018.

Sure to be a dynamite match-up, both competitors accumulatively have knockout victories in every single round from one through ten.

Looking at the data, it can be seen that Campbell possesses more early finishes while Lomachenko appears to pick up the pace from round four onwards; most notably in rounds nine and ten.

One interesting point of note is that Lomachenko doesn’t have a single knockout victory in the first three rounds, often preferring to feel opponents out and ramp up the pace as the fight progresses. Campbell on the other hand has an impressive total of seven knockouts in these rounds, suggesting he could pose the biggest threat to Lomachenko early in the fight.

With both men totaling seven knockouts in round four and five, we can expect to see the action really ramp up here with both men opening up offensively.

Campbell does possess more ring time as a professional and will enjoy a significant height and reach advantage on fight night, but Vasyl’s mastery of the sweet-science will be difficult to overcome.

If Campbell is to walk away with the victory, it will most likely be due to a finish in rounds one through five. If Lomachenko comes out on top, look for him to begin ramping up the pace and get the finish between rounds four and ten.

B Malone is Back!