2018 has seen the Nike VaporMax turn the sneak game on its head with its revolutionary VaporMax cushioning. Now, the kick is back once again, with a fresh white colourway to help switch up your summertime style!

When the Air VaporMax first dropped in early 2018, there had never been anything like it before. Ditching the midsole completely in favour of combining an Air Unit with rubber pods, the fresh crep brought us closer than ever to the feeling of “Running on Air”.

Head and shoulders above the competition in terms of cushioning, the Air VaporMax is a highly sought-after runner for its lasting comfort and support, but as is expected with Nike’s eye-catching silhouettes, the kick was quickly adopted by sneakerheads and is now a street essential – mixing it up with the likes of the Air Force 1 and Air Max family!

Refusing to be satisfied with the OG kick that itself took 7 years to develop, Nike released the Air VaporMax Flyknit mere months after the initial launch! With a Flyknit upper, the sneaker offered an even more lightweight and breathable wear. It seems the sky is quite literally the limit for Nike! 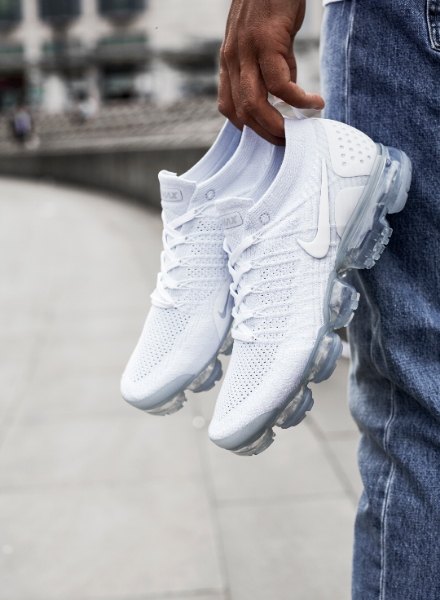 With summer just around the corner, the latest version of the VaporMax Flyknit is ready to style it up in an all-white colourway. Arriving for men and women, the fresh sneak is a must-have essential!