Which UK regions produce the best and worst boxers?

British boxing stars come from all corners of the UK, from professional clubs in some of the biggest cities to the amateur circuit in local areas.

Here at JD, we’ve been punching the numbers to find out which areas come out on top and who takes the L. 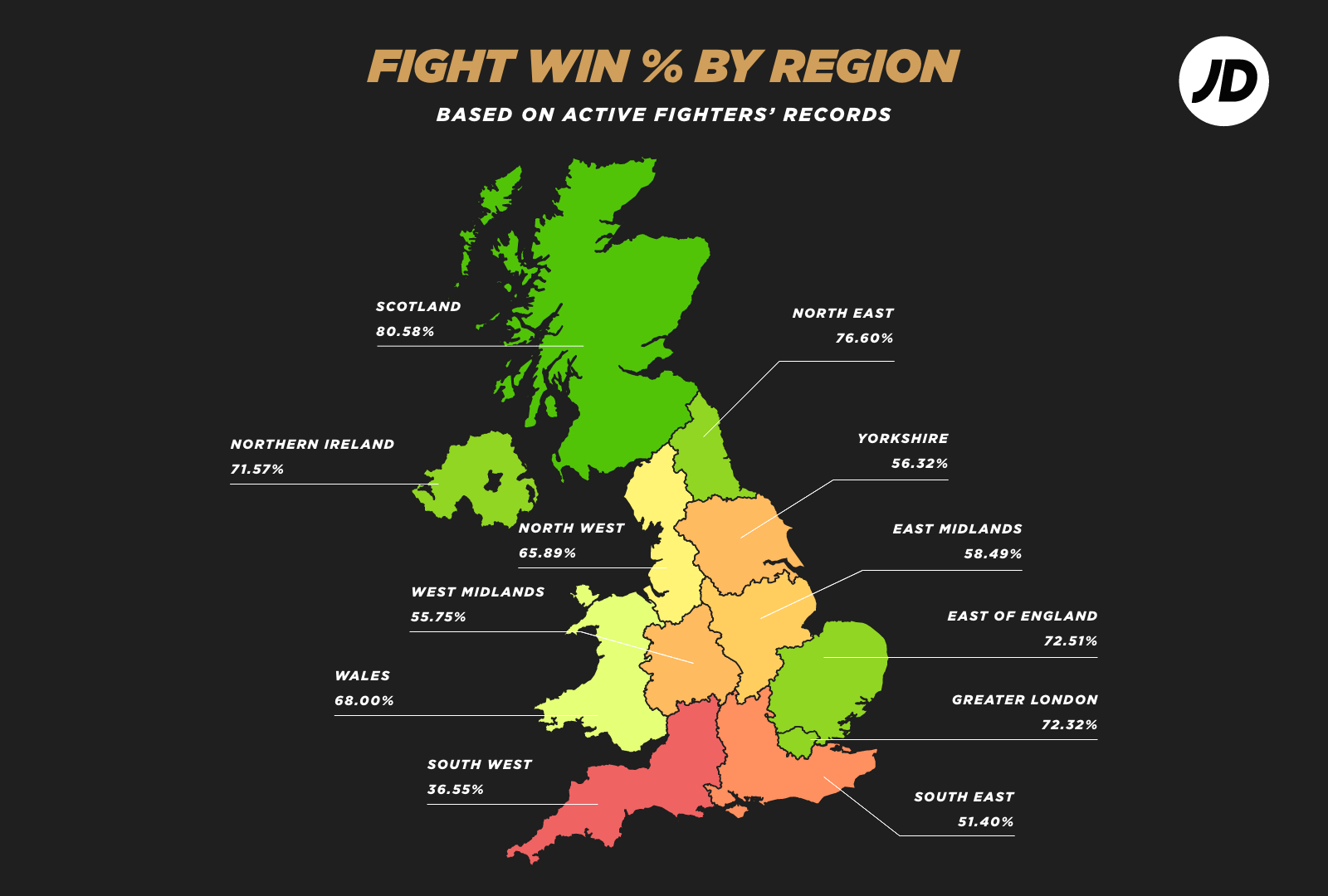 Takin’ claim to the best win percentage in the UK, Scotland stands head and shoulders above all other regions with a dope win rate of 80.58%. Possession’ a powerful pedigree on both the amateur and professional circuit, the spirit of boxing is kept alive in Scotland with an assortment of old and young alike. From old-school fan-favourites such as Ricky Burns and Willie Limonds, to new-school stars such as Josh Taylor and Kieran Smith; Scotland continues to forge top-flight boxers for the UK.

Arrivin’ in second place, the North East’s small but talented repertoire of fighters have amassed an impressive win percentage of 76.60%. While the region is by no means packed with boxers, the North East has still made its mark on the sport. With prize-fighters such as cruiserweight champ, Glen Mcrory, Lewis Ritson and Sunderland’s new promisin’ superstar, Josh Kelly, the region continues to thrive in the ring to this day.

Comin’ in third, with a talented set of prize-fighters, it’s by no means surprisin’ to see the East of England with an outstandin’ win percentage of 72.51%. Home to some of the biggest names in boxing today, the region is perhaps best known for undefeated middleweight technician, Billy Joe Saunders, and JD’s very own two-time heavyweight world champ, Anthony Joshua.

After a major setback in June 2019 to last-minute replacement Andy Ruiz Jr., Joshua put himself back on track for 2020 after avengin’ his sole defeat by comfortably outpointin’ the Mexican American over 12 rounds in December.

The West Midlands’ win percentage stands at just 55.75%, this is even though they boast current top-ranked boxers such as Rob Hunt, Khalid Yafai and Tommy Langford. The West Midlands is also host to a great deal of journeymen boxers; the best example of this is Kevin McCauley, hailin’ from Stourbridge, McCauley currently has the most losses in the UK out of all active fighters.

Despite producin’ excitin’ prospects such as Joe Pigford, Charlie Edwards and middleweight contender Chris Eubank Jr., it is surprisin’ to see that the South East’s overall win percentage stands at just 51.40%. The impressive win streaks of potential prospects in this region are equally matched with a great deal of losses from the local lower league fighters. For example, Berkshire resident, Ibrar Riyaz, who has just a 3% win rate, and Sussex local Liam Griffiths, who fares only slightly better at 5%.

Takin’ the crown for worst win percentage in the UK at 36.55% is the South West. A region largely dominated by hardened journeymen, some of the best examples include: Chris Adaway, Lewis Van Poetsch, Joe Beeden, Liam Richards and Andy Harris – all of who collectively account for 37% of the region’s losses.

Who Comes From Where? 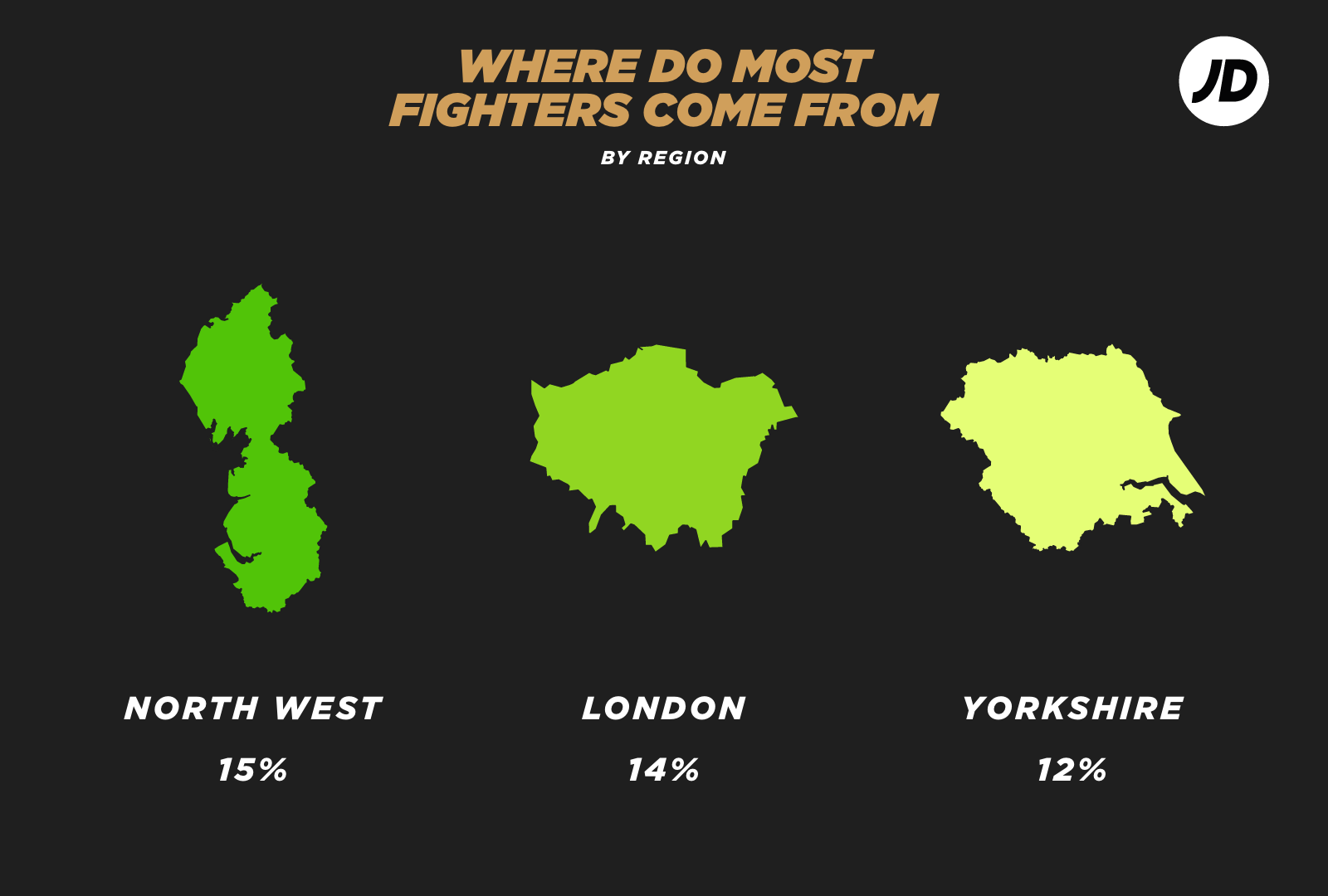 Amassing 15% of the overall total, the North West accounts for the biggest proportion of fighters from any one area.

Of active boxers, the second biggest proportion come from Greater London, this area accounts for 14% of all current fighters. Greater London is home to an extensive list of British boxing legends such as Chris Eubank, Nigel Benn & Frank Bruno; the region is currently known for heavyweight contenders, Dillian Whyte & Dereck Chisora.

The next region is Yorkshire, where we see 12% of active fighters derive from. Still makin’ a mark on the boxing scene today, current Yorkshire prize-fighters include the likes of David Allen, Luke Campbell and undefeated featherweight champ, Josh Warrington.

Which Region Produces the Most from Each Weight Class? 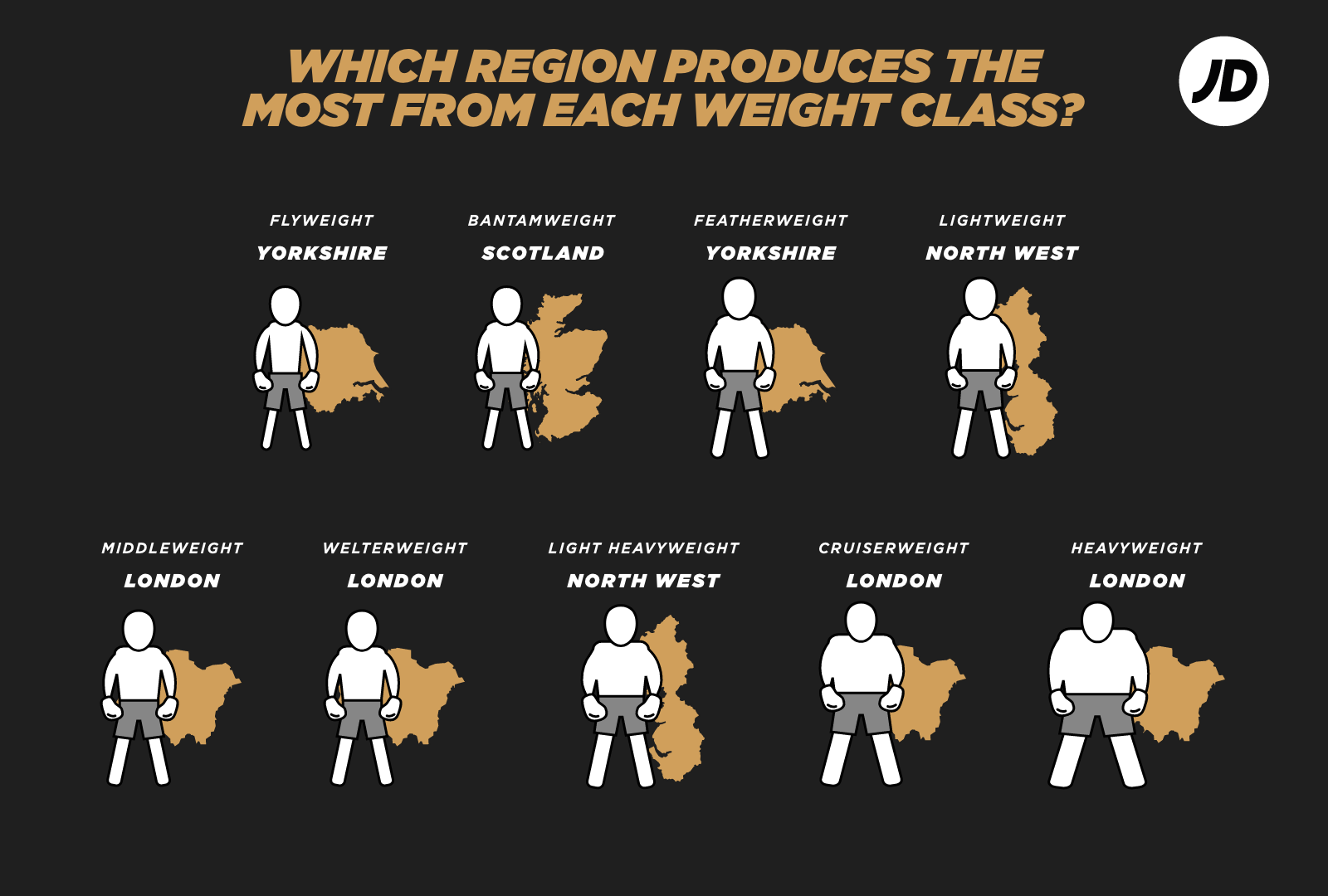 For the purposes of the study, we have decided to pair some weight divisions including fly and super-fly, bantam and super-bantam, and feather and super-feather.

The region responsible for producin’ the most flyweight boxers in the UK is Yorkshire. The northern area has produced 18% of the current crop in the lightest weight division which is 3% more than its closest competitor – the West Midlands. Kyle Yousef has the most impressive record of the Yorkshire-born flyweights, with his 100% win rate. On the other hand, fellow Yorkshireman – ironically named – Craig Derbyshire, has just an 18% win rate in his five-year professional career.

Movin’ up the weight divisions, it appears that Scotland produces the most active bantamweight boxers. The research shows that 19% of current bantam and super bantam fighters derive from the country, with Iain Butcher holdin’ the most wins from those still fightin’, followed by Joe Ham and Ukashir Farooq.

When it comes to featherweight fighters, it’s Yorkshire that appears the most prolific manufacturer. A sizable 18% of the UK’s current boxing featherweights come from the region that contains big boxing cities such as Leeds, Sheffield and Bradford. Josh Warrington holds the best record of operatin’ fighters with an unblemished win rate, the Leeds-born star bested Frenchman Sofiane Takoucht in his last match-up.

The North West comfortably churns out the biggest percentage of current lightweight boxers, with 19% being from this region. Notable lightweight mentions go to Terry Flanagan, the Manchester-born combatant, who has won the biggest number of bouts in his division of active lightweights, at a win percentage of 95; meanwhile, Chorley’s Jack Catterall has the best record of current pugilists, with 25 wins undisputed.

Movin’ up to the welterweight division, the area that is producin’ the most of this mass is London, with 13%. There’s a mixture of competitors which fit this bill that are currently fightin’, from risin’ stars to experienced pros. Ted Cheeseman has forged a solid superwelter career for himself and held the British super welterweight title from 2018 to 2019.

It is London again that produces the most middleweight fighters, 18% of such ringsters derive from the capital and its surroundin’ areas. One of London’s more experienced middleweight boxers is Ashley Theophane, whose career has spanned nearly 20 years and over 50 bouts. London is also home to several journeymen fighters; including Jordan Grannum, who has an astonishin’ 72 losses currently to his name.

In terms of light-heavyweights, it’s the North West that comes out strongest; a sizeable portion of light-heavies come from this region, with 23% fallin’ into the category. Lyndon Arthur represents the North West’s heavyweight star, 28-year-old Arthur is 16 wins undisputed and holds the current Commonwealth light-heavyweight title. This region is also where Tommy Fury, former Love Island star and younger half-brother of Tyson, originates from as he looks to forge a career similar to his elder. Furthermore, at the other end of the scale, journeyman Darryl Sharp, from Middleton, has a win percentage of just 7%!

It’s more capital punishment in the cruiserweight section as London again is the biggest producer boxers per region – over one-quarter (28%) of the cruiserweight division come from the nation’s capital. Lawrence Okolie, born in Hackney, is one of the better-known cruiserweights from London. Okolie is currently 14 wins from as many fights and is the current European cruiserweight champion. Also from the capital with 100% records to date are Deion Jumah and Mikael Lawal.

Onto the final and biggest weight division of them all – the heavyweight section. London again is responsible for producin’ the most here, the capital makes up nearly a quarter (23%) of all active heavyweight fighters. Possessin’ a mix of big, experienced names on the heavyweight circuit and up-and-comers, London is a hotbed for the strongest in current boxing talent. Look no further than Dereck Chisora, who has 32 wins and nine losses to his name in his career so far. In addition to this, bright star Daniel Dubois, who is only 22, has a 100% record as he looks to forge a livelihood at the top of the game.