Most Stylish Celebrities in the UK

As leaders of new trends and styles, JD thought it would be interesting to survey the UK public and see just what influences you take into account when purchasing fashion both instore and online.

We polled 2,000 adults using OnePoll, with an even split amongst age and gender and a representation of all regions in the country, and found some insightful takings. We wanted to assess what exactly influences style and who do we perceive to be an ‘influencer’ in today’s society. Our survey was broken down into the most stylish celebrities, according to the public’s vote, the ways in which we are influenced to shop and which factors contribute to our apparel purchasing decisions.

One of the questions we put to you was on the most stylish celebrities of the moment. Taking into consideration the most  headline grabbing fashion figures of the moment and getting your views on the top 10 men and women in the UK.

Most Stylish Males and Females 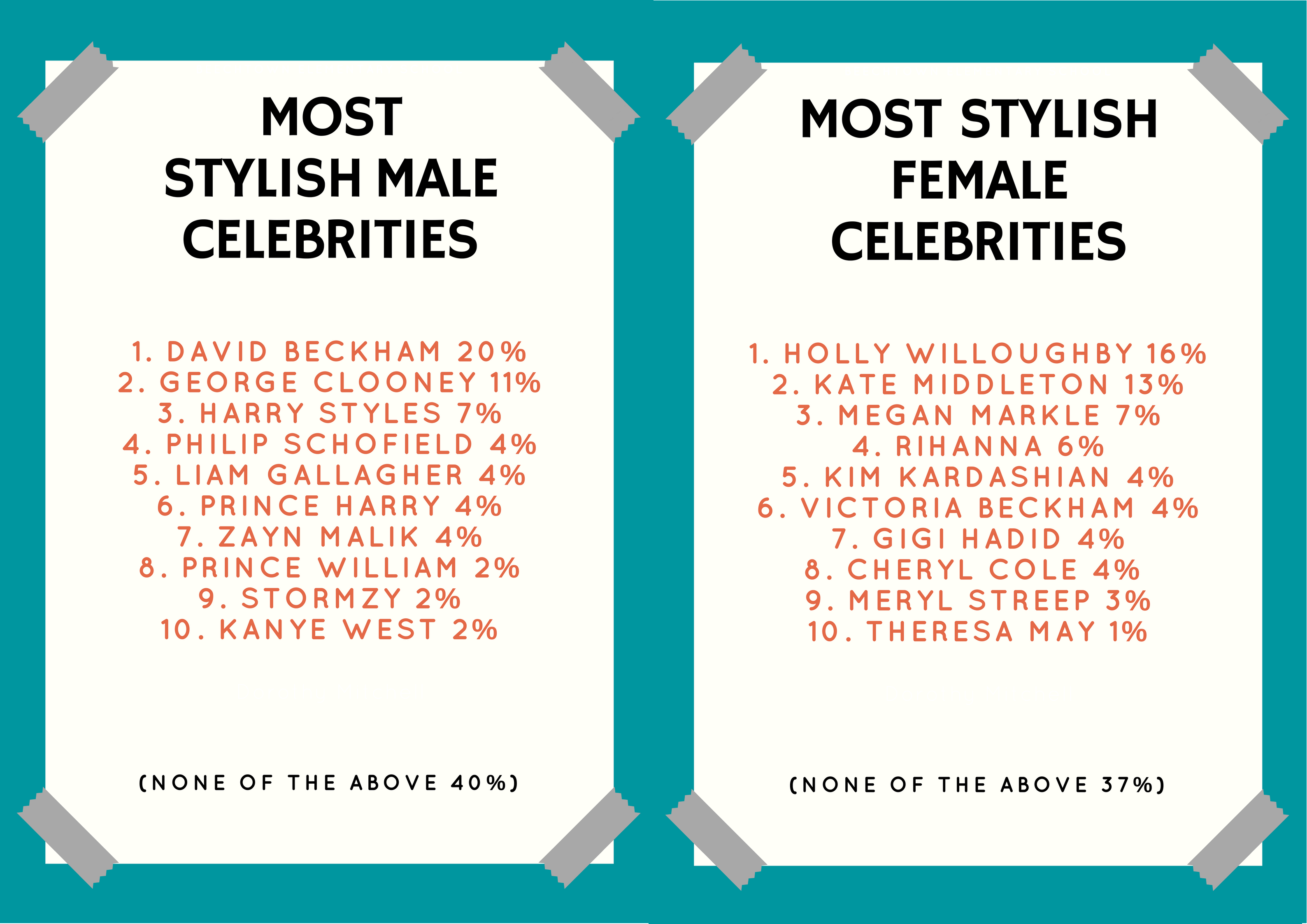 For the guys David Beckham was way ahead on votes, gaining 20% of the votes overall. Holly Willoughby was crowned most stylish female with 16% of votes, beating the Duchess of Cambridge Kate Middleton and top fashionista’s Victoria Beckham and Kim Kardashian for the number 1 spot.

Overall Kate outranked Meghan Markle from all audiences, showing her style choices are still deemed top out of the Royal females.

Perhaps surprisingly, 1% of the public deemed Theresa May most stylish of the bunch, known for her bold shoe choices in the media. Urban influencers and music kings Kanye West and Stormzy came bottom of the men’s list, losing out to fashionable royal Prince William narrowly. 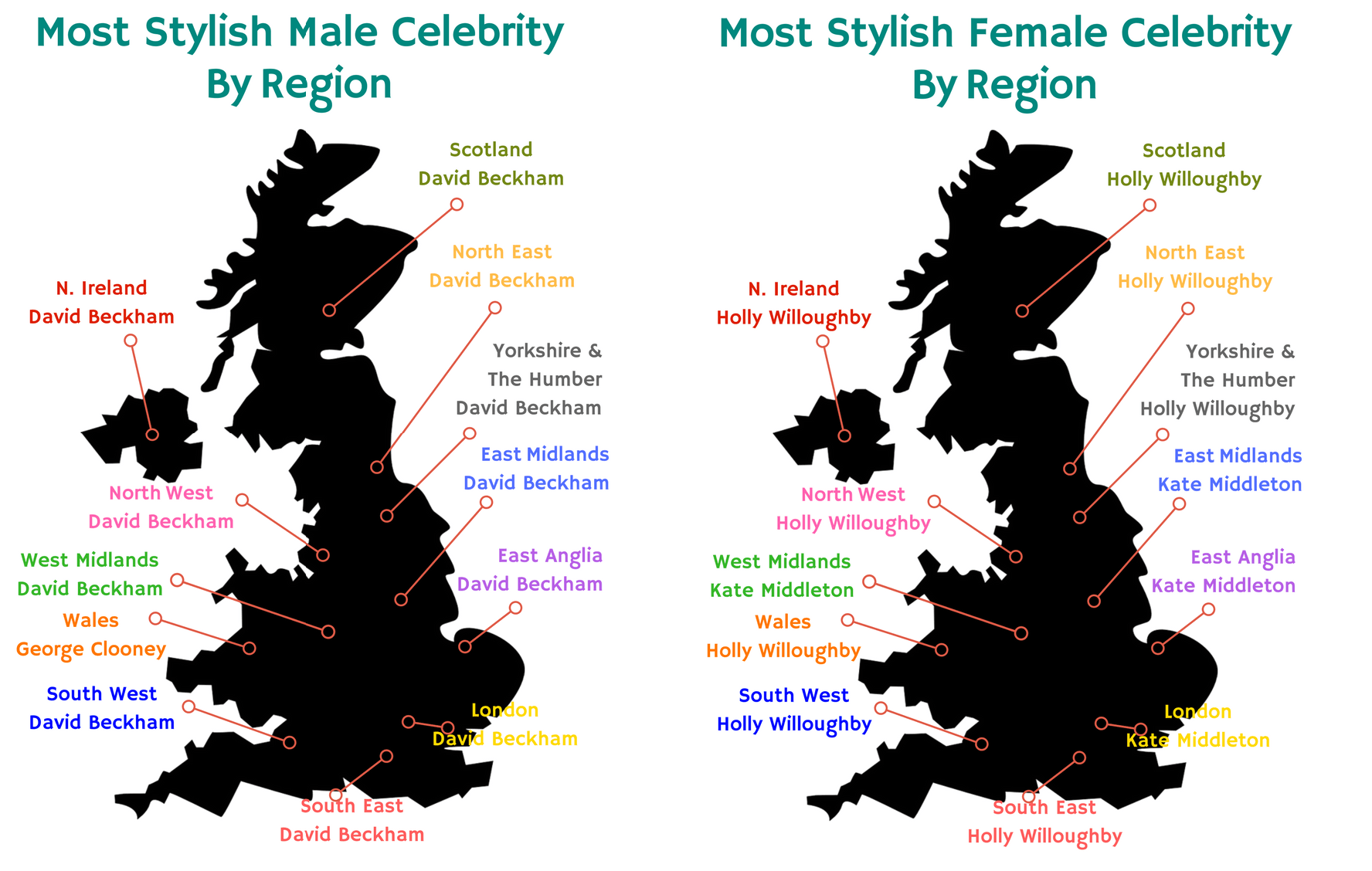 Wales was the only region to disagree on David Beckham being the Most Stylish Male, while opinion was further split on females with areas undecided between Kate Middleton and Holly Willoughby.

Overall Holly Willoughby and David Beckham were crowned most stylish, but when looking at the vote split from men and women, results showed contrast of opinion. 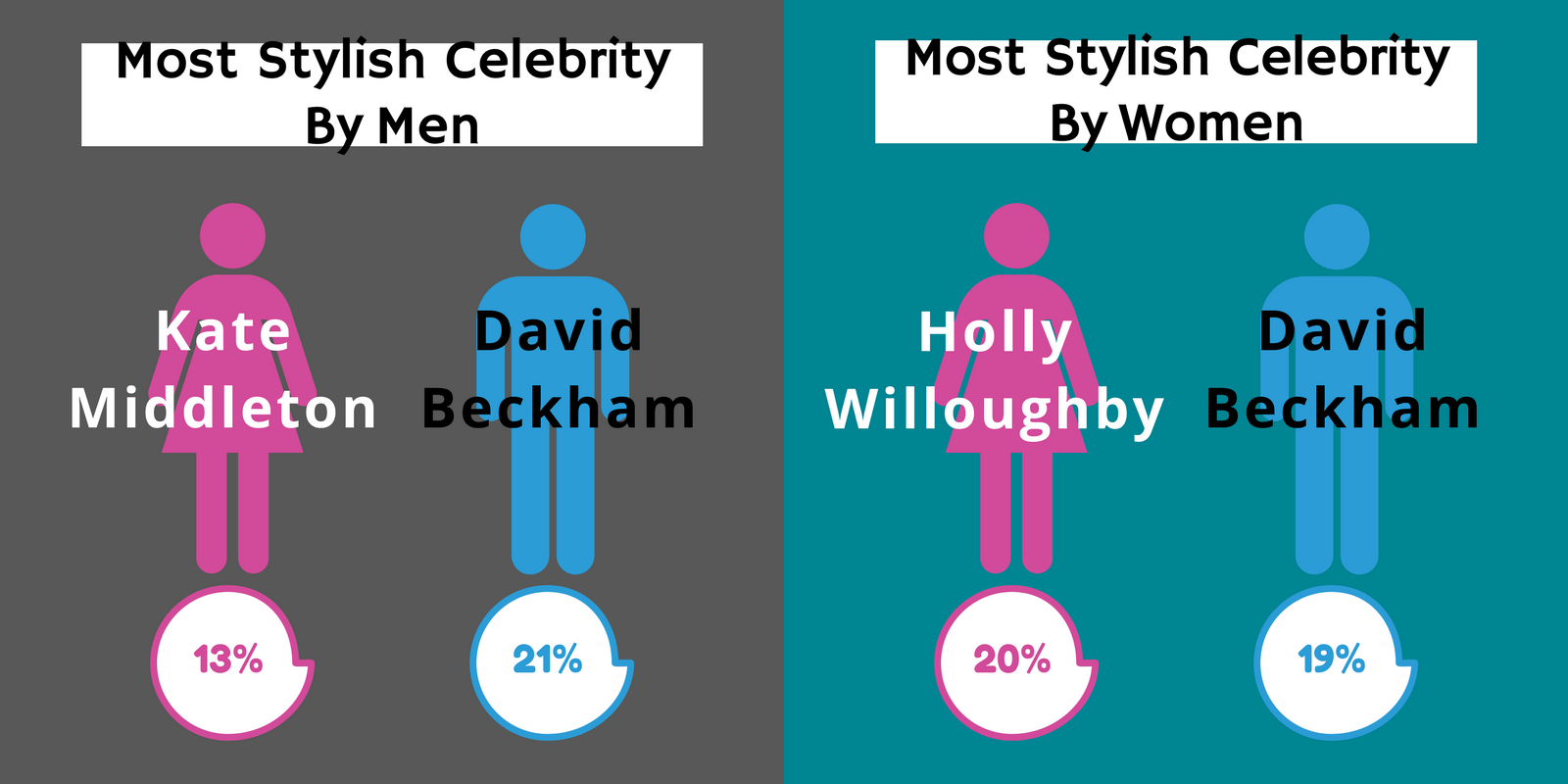 Interestingly 1% of the public voted Theresa May the most stylish female in the UK, with more of those being male than female.

What influences how we shop?

So we know who is influencing us in the media, but looking closer to home what are the contributing factors which affect our choices in what to buy and where from? Our survey audience gave their take on the matter.

In terms of varying factors, the key influence was Brand Loyalty from those who felt influenced by products and brands. It seems a sense of trust built between brands and consumers leads to longevity in sales as shoppers stick to brands they can trust.

Besides the traditional forms of media, affecting factors came from all around. Adults chose themselves (57%), as the main decision makers of their style choices, followed by friends (8%) who beat out Bloggers (7%) and Family (7%). Traditional channels, meaning media and designers, only garnered 3% of votes, showing a shift to more organic and natural methods of persuasions to shop.