Christmas in the Air: Air Huarache

Yet another timeless Nike sneaker your footwear rotation can’t be without, the Nike Air Huarache landed with a bang back in 1991. But how did it become the icon we know today?

Released in the early ‘90s after designer Tinker Hatfield had worked his sneak magic, the Nike Air Huarache powered its way to top spot to become one of Nike’s bestsellers but, not before hitting some SERIOUS hurdles along the way.

After the prototypes landed and no one copped a pair, it was down to Product Manager, Tom Hartage to make that all-important decision, ‘do we cut the shoe or not?’. Luckily for us, he commissioned just 5,000 pairs and took them all to the New York Marathon, in the hope that people would see the runners like he did and get copping.

IT WORKED! He managed to sell all 5,000 pairs in just three days!

From there, the running shoe went on to sell (on average) 4 million pairs a year. It even got a basketball upgrade before settling into the street essential we know and love.

‘Have You Hugged Your Foot Today?’

Hatfield said the original Air Huarache idea came to him after he’d been out water skiing. Wearing SUPER built up boots designed to keep feet firmly in place all day long, Hatfield saw how well a sock-like bootie encased in a supportive exo-skeleton could work. He decided comfort was his main priority and removed the heel counter (the firm backbone to the shoe), and instead used a strap-like harness.

Once he’d mastered the exo-skeleton design, the Huarache’s Air Sole started to come to life. Packed with essential Nike Air Technology including an internal air pocket, the Huarache sole also included a contoured arch and dynamic flex grooves for maximum grip on every ground. 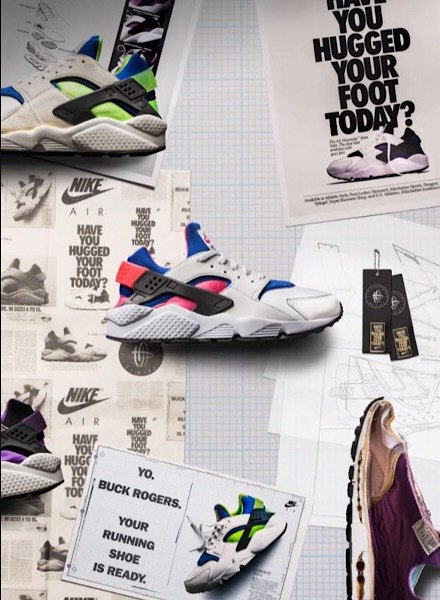 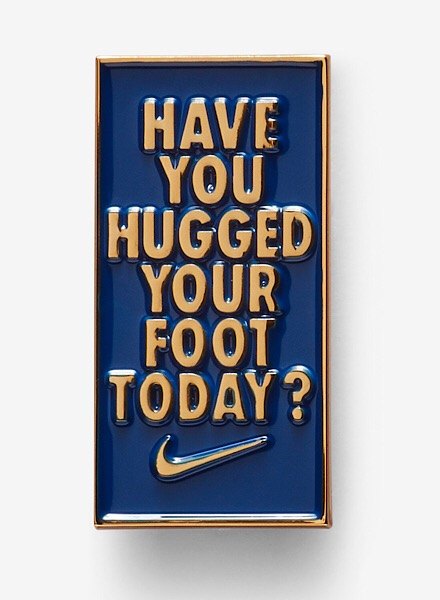 How The Air Huarache Has Evolved…

When the Huarache launched it 1991, its first ad campaign asked, ‘Have you hugged your foot today?’. This was what the Huarache was all about. Unbeatable comfort, serious style and protection. The ad went on to show that the Huarache stretches exactly to YOUR foot.

The look of the Nike Air Huarache’s harness resembles that of a sandal, which is where the iconic sneak get its name from. It’s inspired by the South American Sandal, ‘Huarache’ and other international languages such as Spanish that use, ‘Huaracho’ as the word for sandal.

So yes, you’ve guessed it, the Huarache was designed just like a chunky sandal. Oversized and ultra-comfy, they’re equipped with an encased bootie that makes sure to support your feet with every step. Once the Huarache stand-alone silhouette was born, there was no slowing it! The Huarache was here to stay. 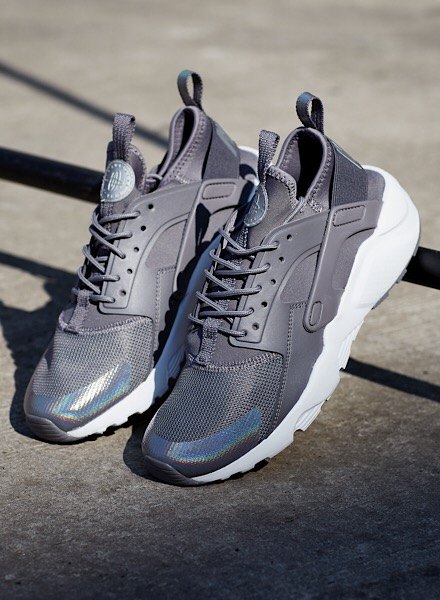 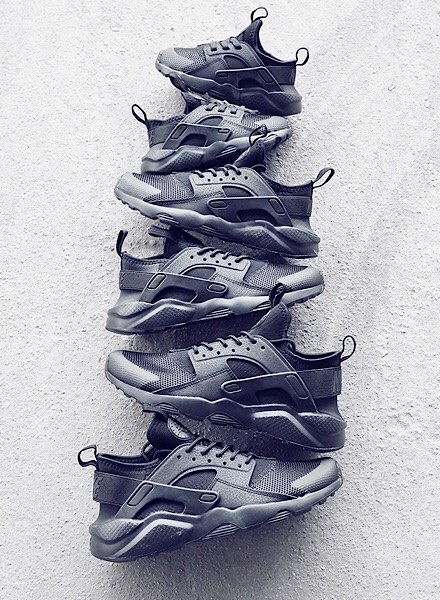 King of the chunky trainers since 91’, the Nike Air Huarache is the OG with a supportive heel and neoprene inner for a comfy sock-like fit. In a huge range of colourways, the internal Nike Air cushioning system gives the sole the ideal amount of lift but remains lightweight.

Finished with textile and synthetic overlays alongside a maximum grip outsole, what’s not to love?

Once the Huarache had landed, it was time to take it up a level with Ultra additions, worn by the likes of Mack Wilds, Drake, Gigi Hadid and Justin Timberlake.

Stripping back the neoprene bootie, the Nike Air Huarache Ultra is wrapped in lightweight comfort, whilst a newly added mesh toe box keeps you cool when its hottin’ up. They also gave a nod to the OG Nike Air Technology with a cored-out foam sole that leaves just the bare essentials for next level performance. This leaves a sole filled with lightweight Phylon compression layers and impact control like never before.

After the initial Ultra launch, Nike launched the Nike Air Huarache Ultra SE. The SE (Special Edition) sneaks came in exclusive colourways but still maintained the iconic lateral and medial side of the original with rubber components filled with oversized branding. 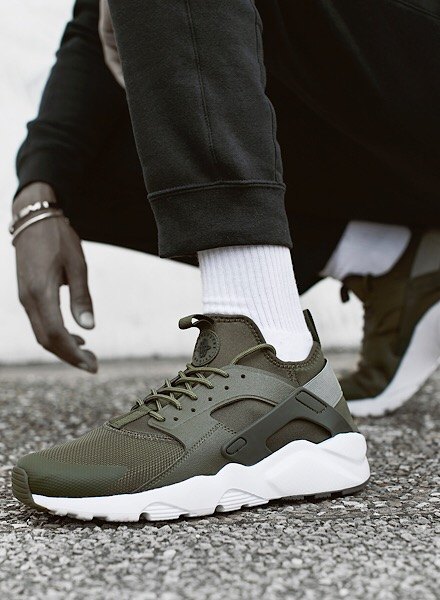 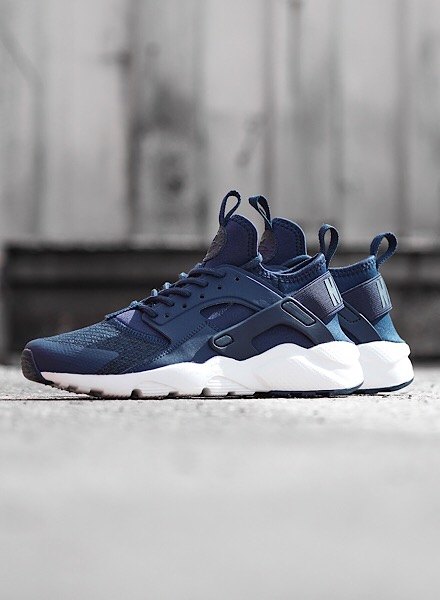 Packed with moisture management tech and breathable mesh fabric, this edition had Nike focusing on all the goodness of the Air Huarache Ultra’s with added breathability. It’s as simple as that!

Taking it back to it’s running roots, this addition to your footwear rotation comes at ya with a zip closure to the tongue. Sat smuggly in the sportswear section, this Huarache makes sure to keep the OG Huarache Air Sole internal air pocket and bootie, but switches it up with zip-up-throat for easy in out access, and added street edge. 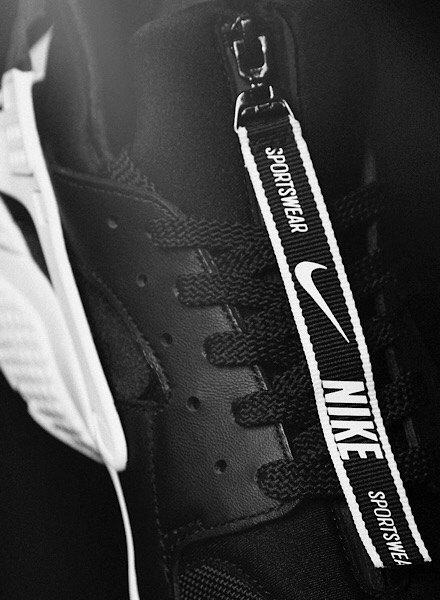 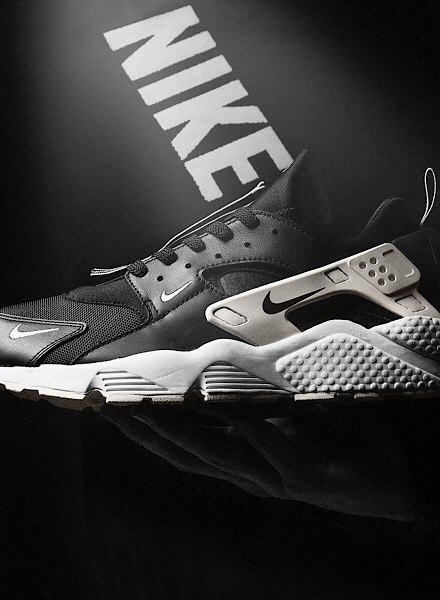 An icon, an Air sole silhouette and a big impact on the Nike Air series. What more could you ask for?