The wait is nearly over. This Saturday at Madison Square Garden, New York City, Katie Taylor and Amanda Serrano put all the titles on the line in a fight that will go down in the history books.

Taking place on Saturday, 30th April in arguably boxing’s most iconic arena that’s hosted some of the greatest fights ever such as Muhammad Ali v Joe Frazier I and Jake Lamotta v Sugar Ray Robinson I, as well as Anthony Joshua against Andy Ruiz Jr. in more recent times. However, this bout could take the mantle as women’s biggest boxing match ever.

The pair have been scheduled to meet in the ring for some time, with two previous dates postponed. Now that the fight is on and with the WBA, WBC, IBF, WBO and The Ring lightweight titles up for grabs, here’s how the two women shape up heading into the 10-round clash.

Tale of the Two

Serrano is no stranger to the big stage of MSG; having fought at the theatre previously to win the vacant WBO World Super Fly title back in January 2019, before following it up with victory over the unbeaten Heather Hardy later that year, to claim the WBO World Feather Title.

In fact, Serrano, nicknamed ‘The Real Deal’ has racked up an impressive 42 wins from 44 outings in a career that spans just over a decade, defeating 9 world champions and holding belts across 7 weight divisions in that time.

Born in Puerto Rico, but fighting most of her career out of Brooklyn, New York, the knockout-artist’s only blemishes in her time in the ring come from a draw to Ela Nunez in just her 5th professional fight, as well as a unanimous points loss to Frida Wallberg 3 years later.

In 2021 she fought 3 times, living up to her name by knocking out Daniela Romina Bermudez to add the IBO World Featherweight title to her WBC and WBO collection. This was backed up by points wins over Yamileth Mercado and Miriam Gutierrez later in the year.

Holding all the belts, Katie Taylor comes into this fight as favourite, but recognises her southpaw counterpart as her greatest test to date.

Donned ‘The Bray Bomber’ from her birthplace, the 35-year-old Irishwoman stands half an inch shorter than her opponent, but with a slightly longer reach in her favour. Despite being the older fighter of the pair, Taylor has had less than half the professional fights that Serrano has, notching up an undefeated record of 20 wins, with 6 coming by way of knockout.

This is down to her late arrival to the professional game. Taylor created fame for herself with 5 consecutive gold medals at the Women’s World Championships, 6 gold medal wins at European Championships and an Olympic gold in the lightweight division at London 2012.

Since turning pro in 2016 under Eddie Hearn’s Matchroom Boxing, Taylor’s stardom has continued to skyrocket, fast-tracking her career to become a two-weight world champ since then.

Known for her fast-paced, aggressive style that always has the crowd on their feet, she became one of only eight boxers in history to hold all four major world titles at the same time, following a close-fought win over Delfine Persoon at MSG back in 2019.

Having defended her titles on six occasions since that huge win, can she do it once again next weekend as the main event? 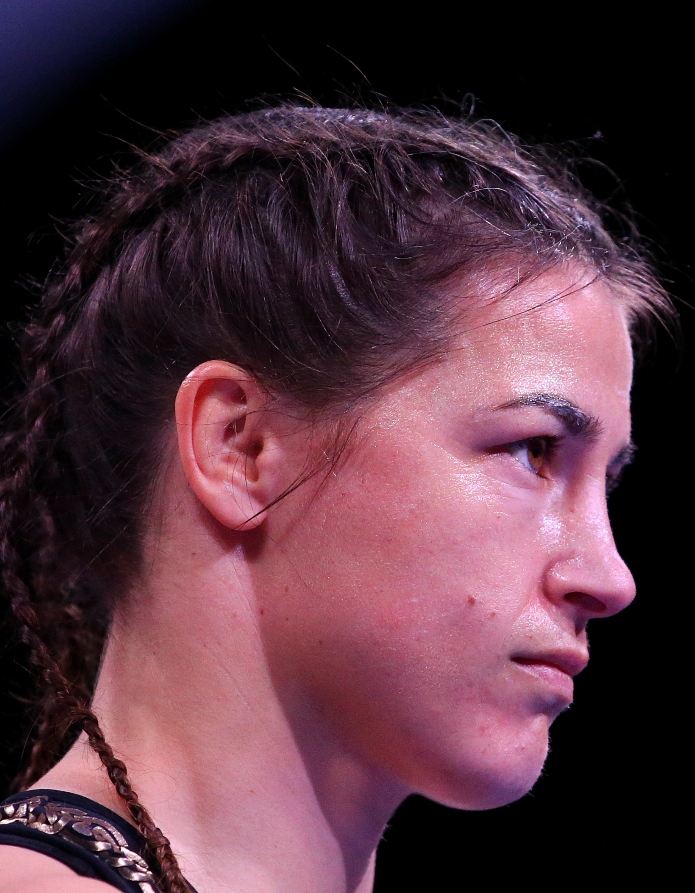 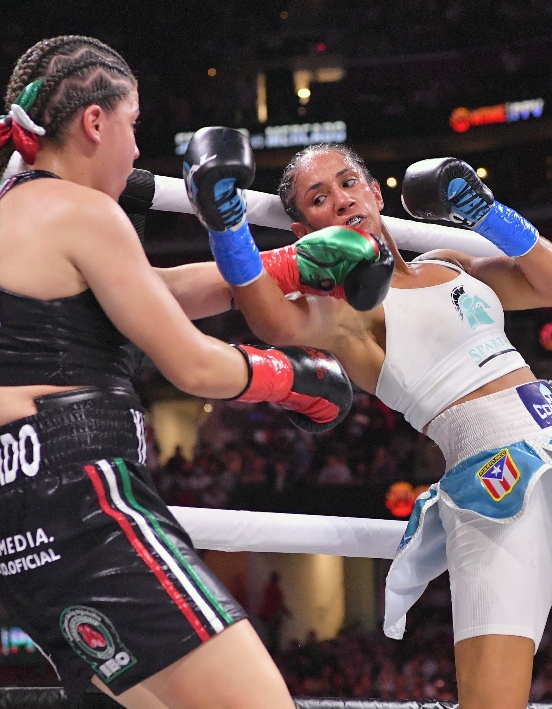 With massive fights on the undercard such as Jessie Vargas against Liverpudlian Liam Smith in the Super Welterweight division, and Franchon Crews Dezurn taking on Elin Cederroos for the WBA, WBC, WBO and IBF Super Middleweight titles, you don’t wanna’ miss this!

Fight night starts at 12.30 a.m. GMT, with the main event ring walks expected at 3.15 a.m. GMT. Stay locked into @jdsports for all your boxing action!