The excitement, the tension, the stakes; just a few components that will make the World Cup 2018 such exciting football to watch. With so much on the line, every goal will make a difference, with that making each penalty an opportunity to shift the odds and earn a potential win. But are those penalties down to sheer luck or is there more strategy involved?

JD Sports analysed over 300 penalties, including career statistics from 22 penalty takers and 11 goalkeepers, taken by players for their club and country to see which players fared better and whose tactics rarely fail to score. The data looked at conversion rates, records, techniques and iconic goals scored on the grandest stage of them all to give a definitive list of the best and worst countries, and players, expected to be seen in this year’s World Cup.

Of the 22 players analysed, Australia’s Mile Jedinak is the only player to successfully convert every penalty taken in his career. Other players with good career conversion rates (beating both Ronaldo and Messi even) include: Olivier Giroud, Marco Reus, Aaron Mooy, Zlatan Ibrahimović and Eden Hazard.

The 2018 Football Writers & PFA player of the year Mohamed Salah statistically has a better career conversion rate than Lionel Messi but slightly worse than Cristiano Ronaldo. Lionel Messi has also missed the most penalties of all the players analysed in total. 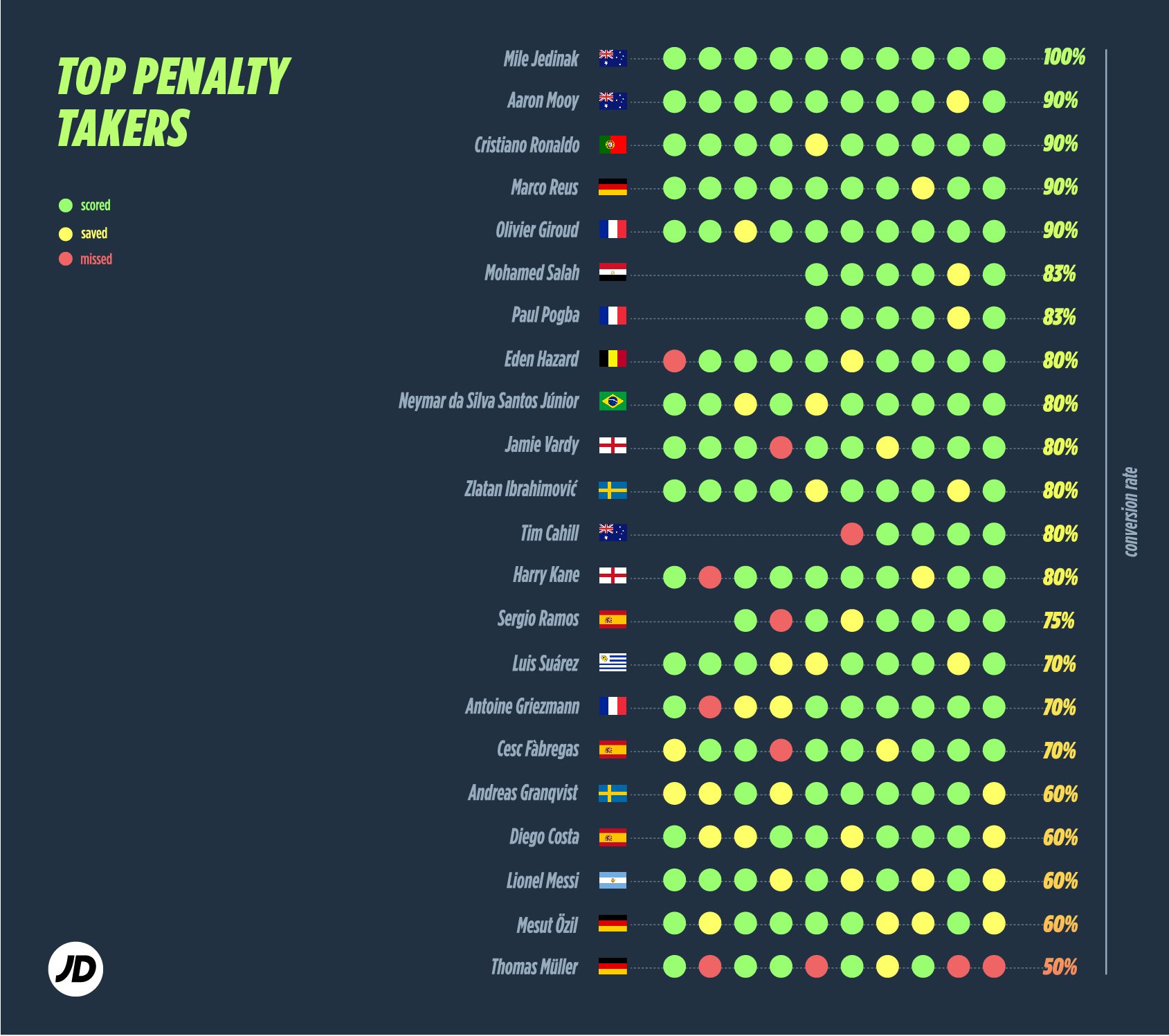 We also looked at current form to show how consistent relevant players are ahead of the World Cup. We looked at the most recent 10 penalties taken by all 22 international takers. Interestingly, the average conversion rate of the 22 players most recent 10 penalties was lower than their average career conversion rate. This could suggest that goalkeepers are saving more penalties in recent years, or that some of the top internationals are becoming less prolific from the spot when it comes to scoring penalties.

Cristiano Ronaldo, Marco Reus, Olivier Giroud and Aaron Mooy all have an excellent penalty conversion rate, with Mohamed Salah and Paul Pogba slightly lower. Neymar, Jamie Vardy, Zlatan Ibrahimović, Tim Cahill and Harry Kane all have a good conversion rate of all scoring 8 out of their last 10 penalties. Real Madrid and Spain Captain Sergio Ramos has a below average form conversion rate, having only taken 8 penalties in his career.

In his career, Griezmann has taken 15 penalties scoring only 9 and missing 6. Similarly, Germany and Arsenal’s Mesut Özil had a below par average conversion.

The stats showed Lionel Messi isn’t as good at taking penalties as many people may think compared to other international players, as he had missed the most penalties.

It is important to note that players like Ronaldo, Messi, Ibrahimović, Hazard and Neymar have taken significantly more penalties overall than some of the other players listed. As a result, many football fans could argue that because of this these are the more reliable and proven penalty takers in highly pressurised situations.

Back to top
Not just focusing on the top scorers, we also analysed the career statistics and current form of 11 international goalkeepers who are likely to be involved at the 2018 World Cup in Russia.

Statistically Brighton & Hove Albion and Australia’s Mathew Ryan performed best, saving 11 of the 30 penalties he has faced throughout his career. Germany and Bayern Munich’s Manuel Neuer is the second best shot stopper, saving 18 of his 52 penalties faced.

Manchester United’s David de Gea has saved over a quarter of all penalties faced throughout his career, not quite managing to beat some of the other nations teams, which may come as a surprise to some fans.

Of all, just under a quarter of penalties were saved by the keepers in our career data with 76% of penalties being scored.

One of the worst performers is the man who many think will be England’s number 1 heading into Russia 2018: Jordan Pickford. Despite his excellent form for Everton this season, Pickford has faced 29 penalties and saved just 5 in his career. 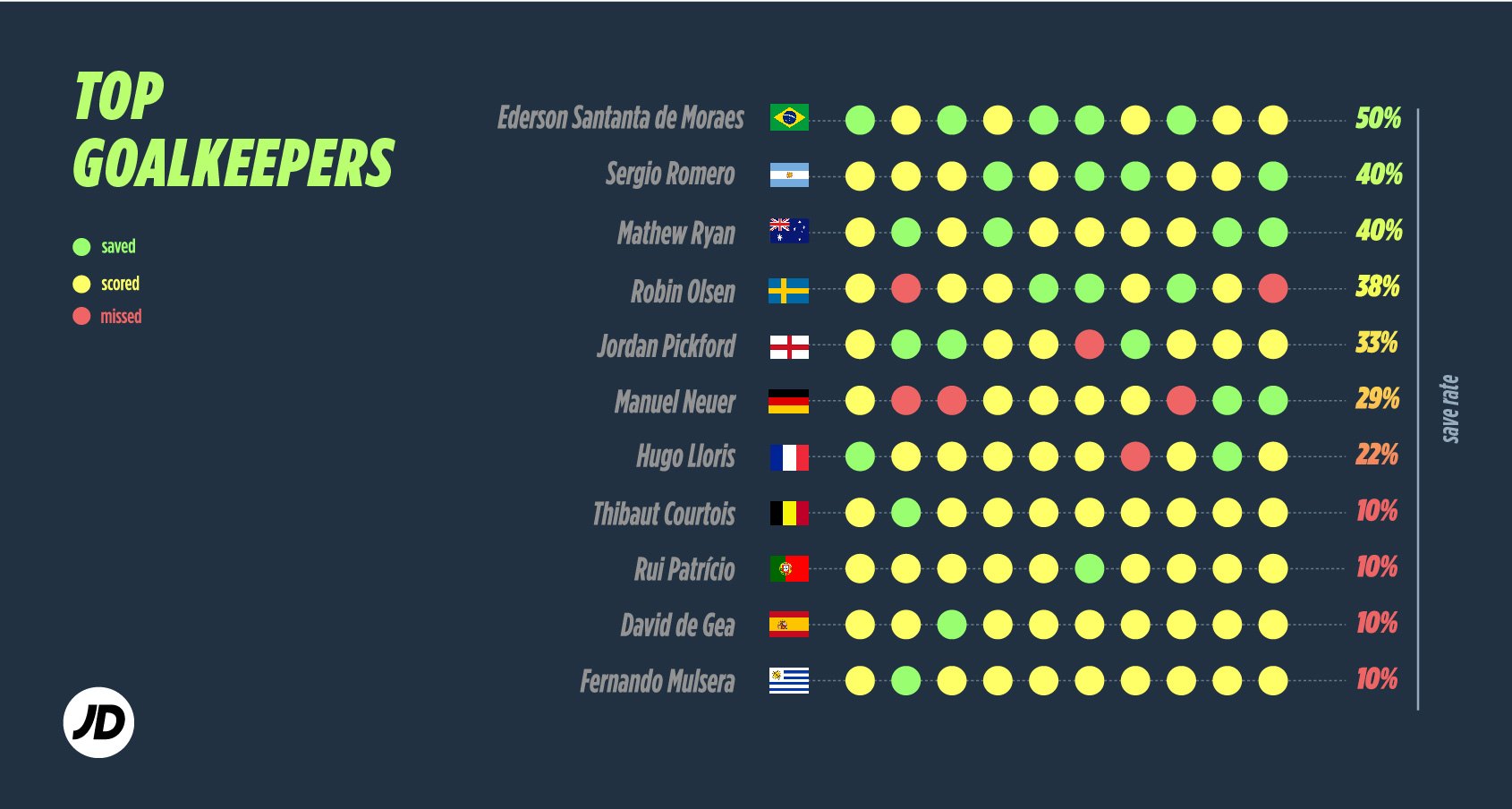 In our data, 4 goalkeepers have only saved 1 of their last 10 penalties: Thibaut Courtois, Rui Patricio, David de Gea and Fernando Muslera. Statistically these are the most out of form goalkeepers when it comes to saving penalties. As the average save rate was higher than the average career penalty save rate by 3%, suggesting that goalkeepers are currently saving slightly more penalties than they have done historically.

Brazil and Manchester City’s Ederson proved the most in form goalkeeper of all, having saved 5 of his last 10 penalties, despite a poorer performance career wise. Sergio Romero and Mathew Ryan are also displaying excellent form currently, saving 4 of the last 10 penalties they have faced.

Sweden’s Robin Olsen also has a solid penalty save rate based on current form. Ederson, Mathew Ryan, Jordan Pickford and Hugo Lloris on average are saving more penalties recently than they have throughout their careers, a welcome turnaround just in time for the World Cup we’re sure.

The bottom 4; Fernando Mulsera, Rui Patricio, Thibault Courtois and David de Gea only managed to save 1 of the last 10 penalties faced, joining for worst form goalkeepers.

The Best and Worst Countries for Penalty Takers 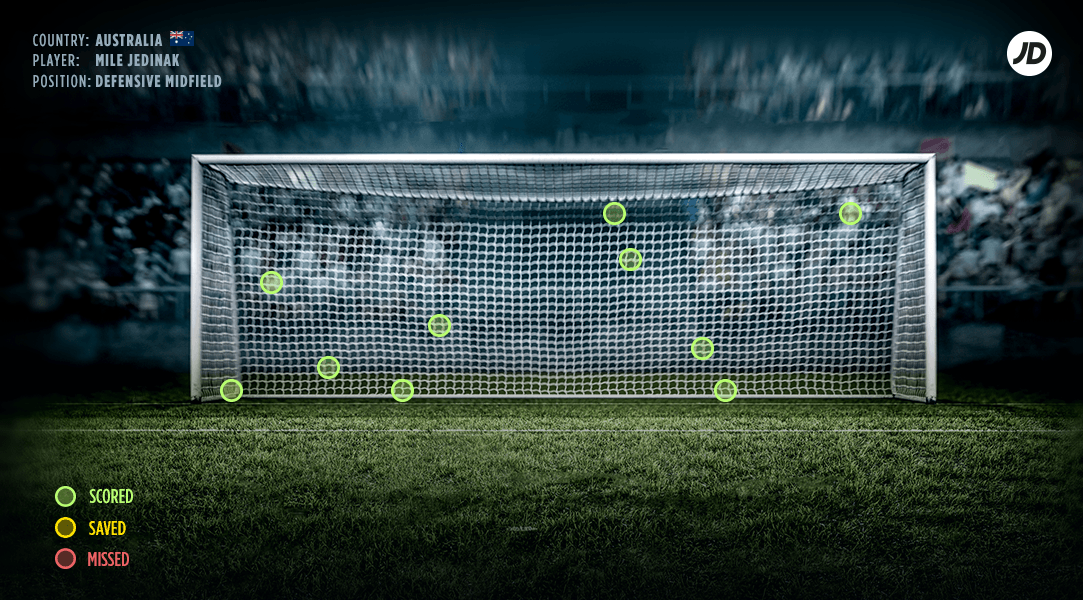 Surprisingly Australia were the best performing country based on penalty statistics. They have 2 penalty takers in the top 5 best performing players for career statistics and form statistics. Mile Jedinak has never missed a penalty in his career scoring all 14 penalties taken and Aaron Mooy has scored 9 of his 10 penalties taken. Tim Cahill also has a respectable 80% career penalty conversion rate, missing just one penalty. Great news for Socceroo’s fans.

Statistically based on career penalty conversion rate Spain are the worst performing international football team of all assessed. Cesc Fàbregas, Diego Costa and Sergio Ramos were all in the bottom 5 of career penalties. Spain also showed to be performing poorly looking at current form.

These three players occupy 3 spots in the worst 5 penalty takers, so it will be interesting to see who steps up in Russia if they win a penalty, or indeed in a penalty shootout situation. Based on career conversion rate Ramos should be Spain’s main penalty taker, despite taking fewer penalties than Costa and Fàbregas in his career.

The form stats don’t read well for German football fans either, as results in form show they have the two current worst penalty takers based on their conversion rate. This is surprising given Germany’s historical dominance and previous successes in penalty shootouts. Germany have a win percentage of 86% in penalty shootouts in major tournaments but will recent performance be more reflective of how this year’s tournament may go?

On the upside Germany do have a man bang in form from the penalty spot: Marco Reus. Reus has scored 9 of his last 10 penalties and possesses an impressive average form conversion rate of 90%. Based on the our findings, if he is in the starting line-up for the Germans, Reus should be their first choice penalty taker ahead of Özil and Muller. However, this may not be the case on the day.

The starts for both countries are surprising, given Germany and Spain’s previous successes in international tournament penalty shootouts. 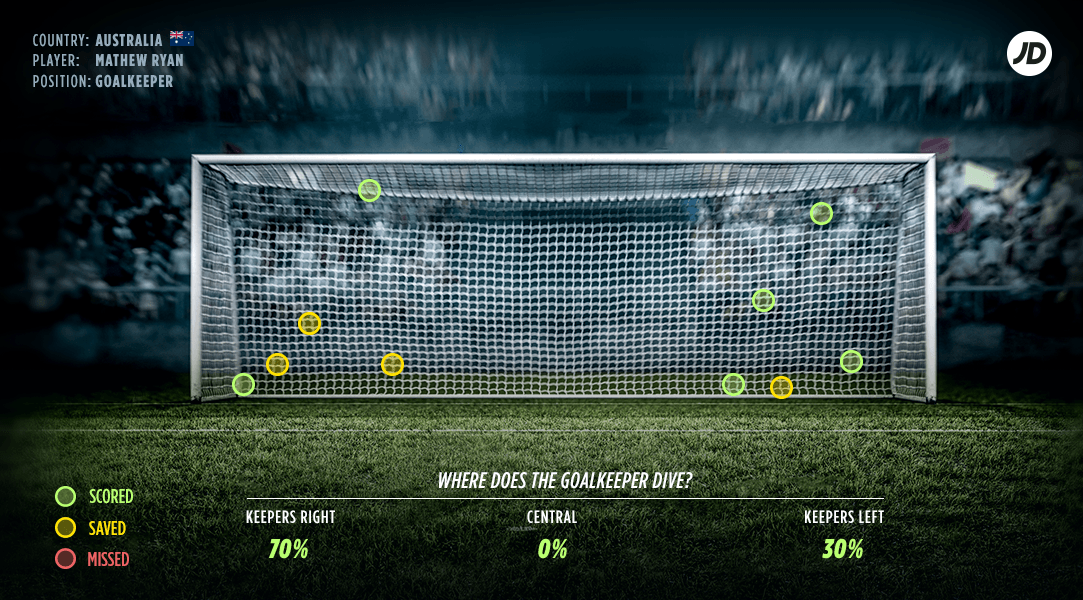 Unfortunately for Uruguay, Fernando Muslera came last on save conversions with a low save rate. France’s Hugo Lloris has the second worst career save rate.

Brazil’s Ederson statistically is showing the best form heading into the 2018 World Cup in Russia, saving 5 of his last 10 penalties faced. Thibaut Courtois (Belgium,) Rui Patrício (Portugal,) David de Gea (Spain) and Fernando Muslera (Uruguay) are all out of form, with current save rates of 10% saving only 1 of their last 10 penalties faced.