Counting down the days to Air Max Day, we’re givin’ you all you need to know about the most iconic sneakers from the Air Max range! Steppin’ up your crep collection with some legendary silhouettes, we start from the beginning with the OG of the Air Max fam: The Air Max 1.

1987 was a huge year for many reasons. Michael Jackson released ‘Bad’, The Simpsons has its debut broadcast (yep, it was that long ago) and most importantly, visible Air hit the helves. Launching as the first sneaker equipped with Air you could see as well as feel, these trainers went down as a street icon.

At the time, Nike’s Air technology wasn’t actually new. Developed by ex Nasa engineer Frank Rudy (fancy, right?), it had already been used in the Tailwind franchise. But the Air Max 1 was the first to expose Air technology, encapsulated in its midsole – giving the true feeling of walking on Air. Designed specifically with enhanced performance and maximise comfort in mind, Nike Air proved that over time foam will break down but air never loses its properties.

What made the Air Max air unit so iconic at the time wasn’t just the fact it offered undisputed performance, comfort and it was there in plain site; but that was was the biggest Air Unit yet (three times bigger than in Nike’s previous designs). Since kicking the Air Max series off in ‘87, Nike has continued to evolve the family by using the same visible air unit in the Air Max 90, 180, 93, 95, 97, 2003, 360, 2015 and more.

When the legendary Nike designer Tinker Hatfield joined Nike he was still an architect, so it isn’t really any surprise he used the Centre Georges Pompidou in Paris as his inspiration for the Air Max 1. The beautiful building gave him the idea of exposing the inner workings on the outside, and so came the revolutionary idea of the visible Air Unit. 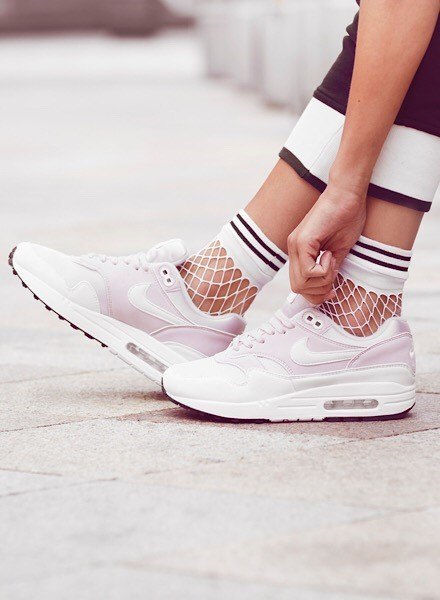 With celebs like Kevin Hart, Swizz Beatz, Chris Brown and Jerry Ferrara reppin’ these sneakers on the reg, it goes to show there really is no going wrong with a classic pair of Air Max 1’s.

Over the years, the Air Max 1 has been released in loads of designs, colourways and extravagant packs. With the abstract collab with Parra, HUF Hyperstrike edition, the iconic and popular Safari pack and premium Jewell collection to name a few, the Air Max 1 continues to evolve and remain relevant in today’s street culture.

It doesn’t just stop here for the sneak either. With different variations of the trainer, including the Air Max 1 Essential, SE and Premium all available to shop now. Check ’em out.

Girl Power from the Girl Gang